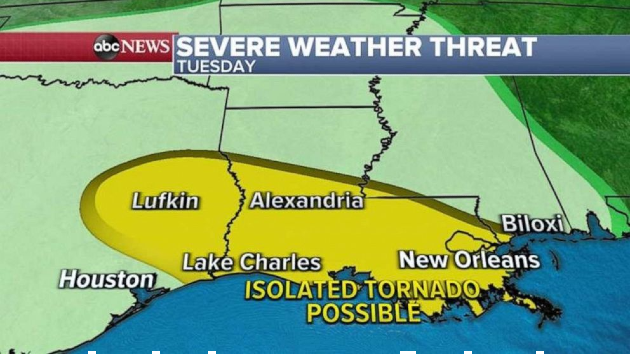 This storm will move east Tuesday from Texas into the Gulf Coast states with a threat for damaging winds, large hail and flash flooding.

Tornadoes are not a major threat in the next 24 hours but it is possible there could be an isolated tornado with the severe weather.

There are more than four million people are on alert Tuesday for severe weather from Lufkin, Texas, to New Orleans, Louisiana.

These severe thunderstorms will be slow moving over the next 24 hours and that could cause flash flooding and locally more than 4 inches of rain could fall in the Gulf Coast.

A flash flood watch has been issued for Louisiana, Mississippi and Alabama.

Meanwhile, a cold blast is moving through the Rockies and the Upper Midwest with snow and low wind chills.

Five states from Colorado to Minnesota are under winter weather alerts and some areas in the highest elevations in Wyoming could see up to 15 inches of snow.