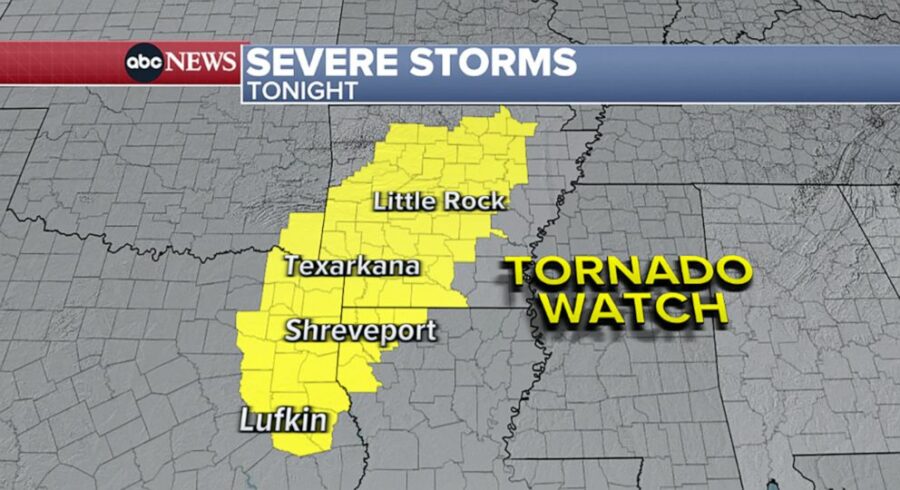 Garland County Sherriff’s Office Deputy Courtney Kizer said 14 homes were damaged, with at least two homes so severely damaged that several families would not be able to live in them again.

A tornado watch was issued for portions of the South, including parts of eastern Texas, northwestern Louisiana and much of Arkansas on Monday.

The tornado watch lasts until 9 p.m. local time, according to the National Weather Service.

One of those destroyed homes was across the street from Jessieville High School, which had seven of its buildings damaged.

Students were in class at the time and were directed to go to their “safe rooms,” Kizer said.

Three commercial buildings in Jessieville were also damaged. No injuries were reported.

Strong to severe thunderstorms will develop across the region with the possibility of damaging winds, hail and a brief tornado risk overnight, putting 22 million Americans, from Texas to Tennessee, under alert.

Thunderstorms will develop ahead of a cold front making its way through southeast Texas late Monday night into Tuesday morning, according to the NWS.

Additionally, the storms could also produce flash flooding through Monday night. Flood watches are in effect.

By Tuesday, the severe storms will shift east across Mississippi and Alabama, with flooding and damaging winds possible from New Orleans to Montgomery, Alabama.

The same storm system that brought flooding to California over the weekend has now moved into the Central U.S., bringing the winter storm to the North and the severe weather and flooding to the South.

At least 22 states, from California to Indiana, are under alert for heavy snow, dangerous ice, high winds and flooding rain.

Over a foot of snow and winds over 40 mph is possible in Nebraska, South Dakota and Minnesota on Monday and Tuesday, potentially causing driving conditions and power outages.

The ice event began on Monday afternoon and will continue throughout the day, with snow falling and covering the ice on Tuesday morning.