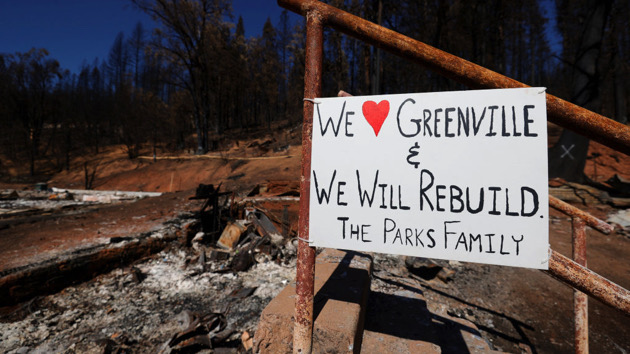 (GREENVILLE, Calif.) — From seed to sawmill, residents from Greenville, California, are pulling up their sleeves to rebuild their community after it was turned into ashes by the Dixie fire in July 2021.

The community will use a sawmill to turn millions of burned-down trees into affordable lumber. The sawmill will officially open in mid-May and contribute to the effort to save forests affected by wildfires with the help of a $360,000 grant from the Sierra Nevada Conservancy.

Randy Pew is a third-generation logger, and he’s taking part in rebuilding Greenville by using the natural resources available.

“We are trying to do what we can,” Pew told ABC News. “Lumber prices are so high and all these natural resources going to waste … something had to be done.”

The sawmill is being built by the Sierra Institute for Community and the Environment in partnership with J&C Enterprises and Sierra Nevada Conservancy. Once the sawmill is completed, its goal will be to “provide hazard-tree removal and low-cost construction materials to residents,” according to a Jan. 31 press release.

There is a lack of sawmills in the state, an ongoing issue that has been leaving millions of area sawmills overloaded for years, and this has led to a slowdown in rebuilding Greenville. Without the sawmills, millions of trees killed in wildfires are unable to be processed for recycling.

Last year, nearly 3 million acres of California forest were affected by wildfires, which burned homes, communities and generational growth forests. The frequency of wildfires has made it even more difficult for communities to restore lost landscapes.

The Dixie fire, considered the largest single origin fire in California history, torched nearly 1 million acres and burned nearly every building in the town. Greenville’s 160-year history was burned down in less than 30 minutes.

With a backlog of 1.2 million acres of land in need of reforestation, the forest service is struggling to keep up with the frequent wildfires.

“Without intervention, trees won’t come back, … and I can say that with great confidence,” said Ramiro Rojas, an assistant regional civic culturist.

Once the cones containing the seeds fall from the trees, they are collected for reseeding by the Placerville Nursery, the only federal nursery in California. The nursery currently provides 4 million seedlings for reforestation efforts primarily on lands impacted by wildfires and insects, according to the United States Department of Agriculture website.

The season during which cones fall at higher rates, according to geneticists, coincides with some of the largest fires in the area between July and October. It is during this time when the role of national forest geneticists becomes even more challenging — to hike into fire zones to collect cones.

“It’s stressful, but rewarding,” geneticist Arnaldo Ferreira said. “I kinda feel like a hero going in there to save a population.”

If there’s no community intervention to replant the trees lost, Rojas said future fires could be even more severe.

“If we don’t intervene in these large-scale fires, then they’ll simply turn to brush and be prone to just repeated high severity fires that, in the end, won’t serve anyone’s interest. It won’t provide water California needs, it won’t store carbon, it won’t make homes for animals, and they won’t be very pleasant to be in or around,” Rojas said.

To catch up with the current backlog, foresters have a target of reseeding 30,000 acres a year by planting 7 million seedlings. The target, however, could take up to 50 years to be achieved.

To begin reconstructing the forest, forester Dana Walsh said the ground needs to be cleared from dead trees killed by the fire for site preparation. Then the trees could be replanted, but the efforts don’t stop there.

She said foresters need to control the competing vegetation so the newly planted trees can live and grow.

The process is lengthy, but with a community like Greenville united for a common goal, Walsh said the support makes all the difference.

“You have to do something with that wood and, if they’re able to productively pull together as a community, use that wood and rebuild their community; that is something that we definitely all want to support,” Walsh said.

A resident of Greenville for more than 30 years, Primo Cassol Jr. lost his home, which was standing for more than 100 years, to the Dixie fire. Now, he’s taking small steps toward rebuilding his town.

“I couldn’t do it without the family and community support,” Cassol Jr. said. Cassol Jr. has already begun reconstructing his house by using the burned wood from the wildfires to build his fence. While the process is slow, Cassol Jr. looks forward to rebuilding his home from the ground up.

“Sometimes I just come up here and sit, and think about how my house will look,” he said.