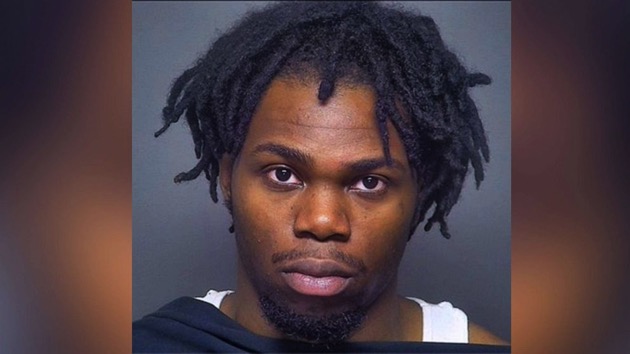 (CHESTER COUNTY, S.C.) — An active search is underway in South Carolina for an accused murderer who reportedly opened fire at deputies during a high-speed chase Monday.

Tyler Donnett Terry, 27, is described as “armed and extremely dangerous,” and York and Chester Police say he is connected to a May 2 murder and two separate shootings.

The Chester County Sheriff’s Office reported a confirmed sighting of Terry between the area of Fishing Creek on Highway 9 Thursday morning around 7:30 a.m.

The sheriff’s office urged locals to remain inside their homes and report any suspicious activity as the search for Terry continued Wednesday evening.

“All residents in the area are encouraged to remain inside, lock their doors, remove firearms from vehicles and ensure your vehicles are locked, and report suspicious activity to 911 immediately,” CCSO said in a release.

Terry was allegedly part of a high-speed police chase with Chester County Sheriff’s deputies on Monday around 11 p.m., the department said in a press release.

Deputies said they approached a vehicle in a parking lot at a Bojangles fast food restaurant in Richburg. The car reportedly took off and refused to stop and multiple shots were fired at deputies, striking two vehicles. No deputies were injured and the chase surpassed speeds of 100 mph, local South Carolina ABC affiliate WSOCTV reported.

The driver, Adrienne Simpson of Myrtle Beach, ended up crashing on Highway 9 was arrested, the Chester County Sheriff’s Office told ABC News. Terry, who was armed, ran into the woods and remained on the loose, the sheriff’s office said.

Authorities connected Terry to the May 2 murder of Thomas Durell Hardin, 35, in York and two other separate shootings, the Chester County Sheriff’s Office told ABC News. The York and Chester police departments said in a Wednesday news release he had always been a suspect in the murder but after the police chase Monday, detectives collected enough credible evidence to charge him.

Simpson allegedly drove the vehicle that transported Terry in the May 2 murder and she’s been charged with accessory after the fact, according to the press release.

The two other shootings were also on May 2, at Erlich Street in Chester and at a Taco Bell on the J A Chochran Bypass.

There are multiple warrants for Terry’s arrest. York Police announced Wednesday they have obtained warrants for murder and possession of a weapon during a violent crime against Terry in Hardin’s death in York. The Chester City Police Department has also obtained five warrants for attempted murder against Terry, all stemming from the shooting incidents that occurred on May 2nd on Erlich Street and the Taco Bell.

At the moment, Terry is still at large.

Earlier Wednesday, a suspected spotting of Terry and search in Rock Hill prompted the lockdown of six nearby schools as a safety precaution, authorities said.

“It’s (the area) got everything — wooded areas, creeks, roads, schools, lots of abandoned buildings, sheds,” Trent Faris, the spokesman for the York County Sheriff’s Office, said to WSOCTV. “Lots of places he can hide, so that’s why we have so many people here to make sure we try to find him and make sure he doesn’t do anything — hurt anyone else.”

Terry is described as an African American male, 5 feet, 7 inches tall, wearing all black, no shoes, and with dreadlocks.

Police are offering a cash reward up to $1,000 for any tip that leads to an arrest.