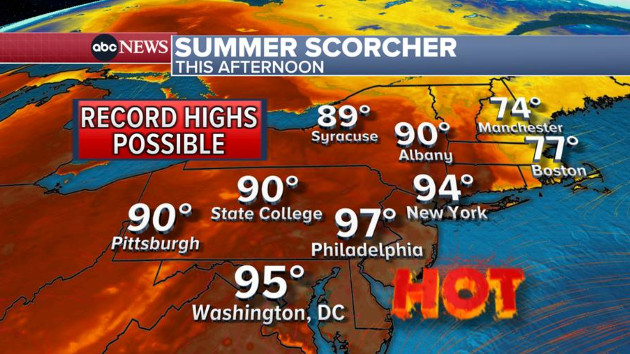 (NEW YORK) — Break out the sunscreen, hats and water bottles: record high temperatures are possible in the Northeast Tuesday afternoon.

Temperatures are forecast to skyrocket to 94 degrees in New York City, 97 degrees in Philadelphia, 95 degrees in Washington, D.C., and 90 degrees in Pittsburgh.

The record high temperatures currently stand at 96 degrees for New York City, 97 for Philadelphia and 99 for D.C.

In Baltimore, students at public schools without air conditioning will be released at noon on Tuesday, according to the school district.

This dangerous heat won’t last long for New York City, with temperatures falling to around 70 degrees on Wednesday. But the Philadelphia and D.C. areas will still be near 90 degrees Wednesday.

Click here to learn tips to stay safe in the heat.