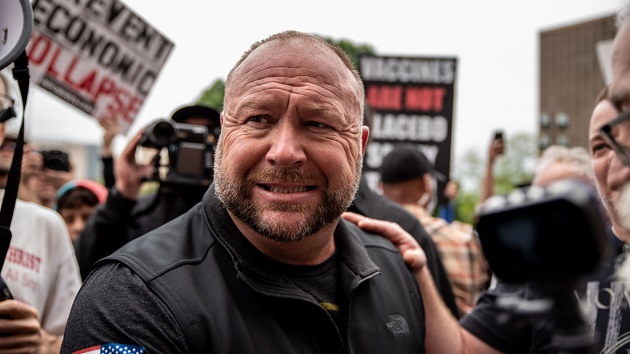 (NEW YORK) — Families of victims of the 2012 massacre at Sandy Hook Elementary School have agreed to remove InfoWars as a defendant in their defamation lawsuit, hoping to end what they’ve called the “charade” of InfoWars’ bankruptcy filing.

The families accused InfoWars of “intolerable abuse” through bankruptcy, which the website sought after it and founder Alex Jones were found liable for damages after claiming the Newtown, Connecticut, shooting that killed 20 children and six staff members was a hoax.

When an entity files for bankruptcy protection, it automatically suspends all litigation pending against that entity.

“These cases were removed to this Court to serve one purpose and one purpose only: delay,” the families said in new court documents filed in Connecticut on Monday.

“Every day that these cases are frozen on the Connecticut Superior Court docket is a day that Alex Jones avoids accountability and delays trial,” the document states. “Every day they are removed harms these families’ fight for justice.”

Last month, Jones was fined $25,000 for declining to sit for a deposition for the lawsuit. The Connecticut court ultimately ordered the return of $75,000 in fines after Jones attended a rescheduled deposition later in the month.

Jones is facing a new lawsuit in Texas over accusations that the Infowars host hid millions of dollars in assets after the litigation in the Sandy Hook case began.

Jones himself did not file for bankruptcy, and it’s believed he retains the bulk of the assets that could be used to pay the families’ damage awards. The families called InfoWars and its offshoots “shell companies” that offered nothing.

“To ensure that this intolerable abuse of the removal process ends immediately, all of the plaintiffs in these case … voluntarily dismissed all of their claims against Infowars,” the filing said.

Neither Jones nor his attorneys immediately responded to ABC News’ request for comment.