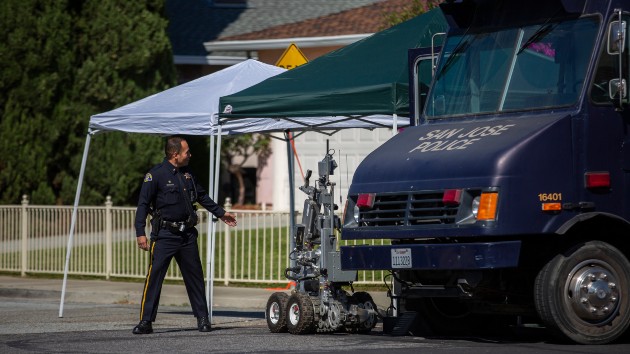 (SAN JOSE, Calif.) — The man who allegedly gunned down nine people in San Jose, California, on Wednesday planned the massacre and “was prepared to use his firearms to take as many lives as he possibly could,” the Santa Clara County Sheriff’s Department said Friday.

Authorities do not have a motive for why Cassidy, a Santa Clara Valley Transportation Authority employee, allegedly shot and killed nine men at the VTA light rail yard Wednesday morning.

“Detectives are investigating his relationship with VTA,” the sheriff’s office said Friday.

A fire was reported at Cassidy’s house minutes after the shooting, and the sheriff’s office said investigators believe Cassidy “coordinated the destruction of his residence.”

The search of Cassidy’s home is ongoing. San Jose Fire Department spokesperson Erica Ray said on Friday that it’s complicated by “heavy” damage that rendered the residence “uninhabitable.” The fire seemed to burn quickly, she added.

Cassidy died at the transit hub on Wednesday, apparently from a self-inflicted gunshot wound.

Thirty-nine shots were fired at the scene, authorities said.

There were magazines that could hold up to 12 bullets, which are illegal in California, authorities said. There was no indication those were modified for rapid shooting, Smith said.

FBI Special Agent In Charge Craig Fair told ABC News on Thursday that investigators have obtained surveillance footage that captures the shooter walking into the building before the incident. FBI agents are working five crime scenes within the site and will be mapping them out digitally to recreate the shooting, he said.

Kirk Bertolet, a VTA employee, was in a secure room at the transit hub when shots rang out. He said he felt helpless listening to the gunshots. When the shooter moved to another building, Bertolet said he ran to help his friends and coworkers but they were already dead.

Bertolet said he believes the shooter targeted his victims and spared others. He said the gunman looked at one of his coworkers, who was curled up on the floor, but didn’t shoot her.

“She was right among everybody else,” he said.

Beyond an arrest in the 1980s over a “minor” incident, the suspect had no other known criminal history, authorities said.

Cassidy was questioned by Customs and Border Protection in 2016, three sources familiar with the probe told ABC News.

He was stopped by U.S. Customs and Border Protection agents while returning to the U.S. from the Philippines in August 2016. He allegedly was carrying books about terrorism and manifestos, which was the reason for the stop, sources said.

Cassidy was also allegedly carrying a notebook in which he wrote about his apparent hatred of his workplace, according to sources familiar with the matter. This development was first reported by The Wall Street Journal.

A Department of Homeland Security spokesperson declined to comment on the specifics of the case, citing the ongoing investigation, but said in a statement: “Under the leadership of Secretary [Alejandro] Mayorkas, in February, DHS commenced a department-wide review which included efforts to ensure law enforcement personnel have the tools and training to identify behavioral indicators associated with targeted violence and policy to improve information sharing with our partners.”