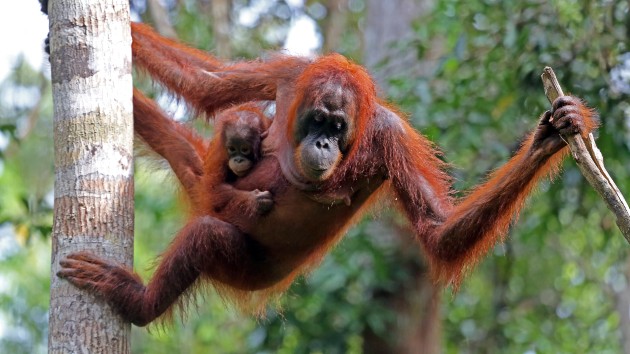 (SAN DIEGO) — The San Diego Zoo announced on Thursday it was in the process of inoculating many of its great apes after several of its gorillas became sick with SARS-CoV-2, the virus that causes COVID-19, in January.

So far, four orangutans and five bonobos are in the process of being vaccinated, the San Diego Union Tribune reported. The zoo would only say “some of the members of the great apes” were being vaccinated.

Zoetis, a producer of medicine and vaccinations for animals, provided the shots, according to the zoo, and they were not for human use.

“Zoetis provided our veterinarians with a limited supply of recombinant purified spike protein vaccine, intended for use in protecting animals against SARS-CoV-2,” San Diego Zoo said in a statement. “The vaccine doses originated from a supply strictly intended for nonhuman use.”

These are the first known vaccinations of great apes, the zoo said.

The zoo said the animals were getting two shots three weeks apart — just like the Moderna and Pfizer vaccines developed for humans — and had begun receiving them in January. Officials said they have seen no adverse reactions to the injections.

Meanwhile, the troop of gorillas at San Diego Zoo Safari Park that was infected is on the mend.

“The gorilla troop at the San Diego Zoo Safari Park are doing well and appear to be on their way to a full recovery,” officials said in a statement.

The gorillas will not be vaccinated “as they were exposed to the SARS-CoV-2 virus, and we assume their own immune systems have developed antibodies to the virus,” the park said.

In February, Lisa Peterson, executive director of the San Diego Zoo Safari Park, said the zoo was “so grateful for the outpouring concern and support we’ve received while the troop safely recovered.”

Vaccines for the primates known as humans remain in short supply around the country, including California.

Atlanta Zoo closing early due to extreme heat: How the animals are staying safe