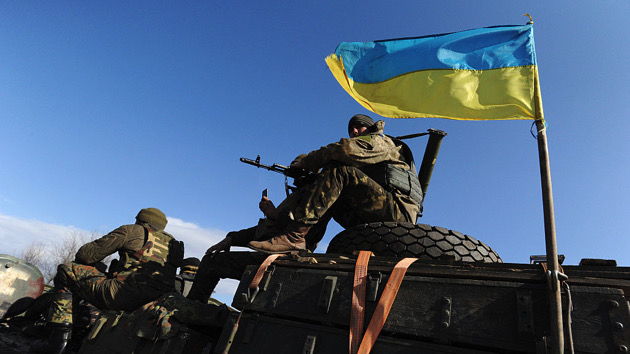 (NEW YORK) — Russian President Vladimir Putin’s “special military operation” into neighboring Ukraine began on Feb. 24, with Russian forces invading from Belarus, to the north, and Russia, to the east. Ukrainian troops have offered “stiff resistance,” according to U.S. officials.

The Russian military last month launched a full-scale ground offensive in eastern Ukraine’s disputed Donbas region, attempting to capture the strategic port city of Mariupol and to secure a coastal corridor to the Moscow-annexed Crimean Peninsula.

May 02, 5:48 am
Pelosi leads delegation to Poland after visiting Ukraine

“Our distinguished Congressional delegation came to Poland to send an unmistakable message to the world: that America stands firmly with our NATO allies in our support for Ukraine,” Pelosi said in a statement.

Pelosi said their talks with Duda and other Polish officials in the Polish capital “will be focused on further strengthening our partnership, offering our gratitude for Poland’s humanitarian leadership, and discussing how we can further work together to support Ukraine.”

Earlier, Pelosi and the half dozen U.S. lawmakers with her traveled to the southeastern Polish city of Rzeszow, where they met with U.S. Army soldiers assigned to the 82nd Airborne Division stationed in Poland to reassure NATO allies and deter Russian aggression.

“These engagements are even more meaningful following our meeting in Kyiv with President Volodymr Zelenskyy and other top Ukrainian leaders,” Pelosi said. “In that profound and solemn visit, our delegation conveyed our respect and gratitude to President Zelenskyy for his leadership and our admiration of the Ukrainian people for their courage in the fight against Russia’s diabolical invasion. Our Members were proud to deliver the message that additional American support is on the way, as we work to transform President Biden’s strong funding request into a legislative package.”

Pelosi, second in line to the U.S. presidency after the vice president, was the most senior American lawmaker to visit Ukraine since Russia launched its invasion on Feb. 24. The delegation’s trip to the Ukrainian capital was not disclosed until they were safely out of the country.

Russian forces resumed shelling the Azovstal steel plant in Mariupol on Sunday after some civilians inside the facility and in nearby homes were evacuated during a brief cease fire, according Ukrainian officials.

“They are shelling the plant with all kinds of weapons,” said Denis Schlega, commander of the 12th Brigade of Operational Assignment in Mariupol.

Earlier Sunday, Ukrainian President Volodymyr Zelenskyy, the International Committee of the Red Cross, the United Nations and Russian Ministry of Defense all confirmed that some civilians were evacuated from the steel plant, where a Ukrainian military unit is making a last stand in the port city that is almost entirely under Russian control.

Zelenskyy said about 100 civilians were evacuated from the steel plant on Sunday and were being taken to Zaporizhia, a city under Ukrainian control.

The Mariupol City Council said in a statement that evacuations from Mariupol had stopped Sunday afternoon due to “security reasons.” The city council said the evacuations would resume on Monday.

At least three civilians were killed and eight others injured on Sunday as a result of heavy shelling from Russian forces in the Kharkiv region in northeast Ukraine, according to a Ukrainian official.

The casualties were reported in the residential areas of Saltivka, Bohodukhiv and Zolochif, according to Oleg Sinegubov, head of the Kharkiv Regional Military Administration.

Pope Francis on Sunday described the war in Ukraine as a “macabre regression of humanity” that makes him “suffer and cry.”

Speaking to thousands of people crowded into St. Peter’s Square at the Vatican, the pope called for humanitarian corridors to be opened to evacuate civilians trapped inside or near a steel plant in the Ukrainian port city of Mariupol.

Evacuation of civilians at the Azovstal steel plant, where Ukrainian forces have been staging a last stand against Russian troops, have started, Ukrainian President Volodymyr Zelenskyy, the Red Cross and the Russian Ministry of Defense confirmed on Sunday.

During Sunday’s Vatican service, Francis repeated his criticism of Russia for invading Ukraine.

“My thoughts go immediately to the Ukrainian city of Mariupol, the city of Mary, barbarously bombarded and destroyed,” the pontiff said of the Russian-controlled southeastern port city, which is named after Mary. “I suffer and cry thinking of the suffering of the Ukrainian population, in particular the weakest, the elderly, the children.”

In Catholicism, the month of May is dedicated to Mary, the mother of Jesus. Francis asked for monthlong prayers for peace in Ukraine.

“While we are witnessing a macabre regression of humanity, I ask you, together with so many anguished people, if we are really seeking peace, if there is the will to avoid a continuous military and verbal escalation, if we are doing everything possible to make the weapons stop? Please, let us not give in to the logic of violence, to the perverse spiral of arms. Let us take the path of dialogue and peace. Let us pray.”