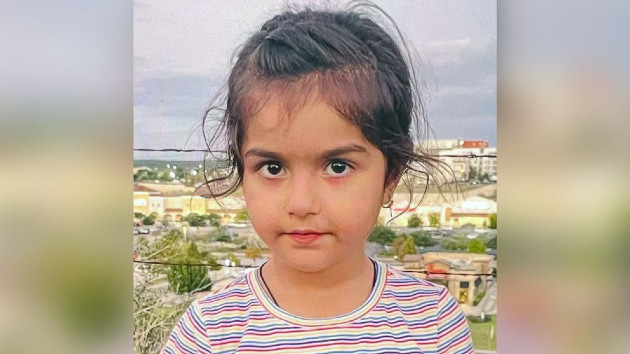 (SAN ANTONIO, Texas) — The reward for Lina Sardar Khil, the girl who went missing in San Antonio, Texas, last December has increased to $250,000 as police ask the public for any information regarding Lina’s whereabouts.

On Lina’s birthday, the Islamic Center of San Antonio announced that it increased a $120,000 reward for any information on Lina to $200,000. Meanwhile, Crime Stoppers of San Antonio has offered $50,000 for information resulting in the arrest or indictment of a suspect accused of involvement in Lina’s disappearance, bringing the latest total to $250,000.

Pamela Allen, who is representing the Khil family, told ABC News that Lina’s family had held out hope that she would be found to celebrate her fourth birthday at home.

“Her light is missing from her family and community. Our continuous prayer is that she will be back in the arms of those that love her,” Allen said.

Allen is the CEO of Eagles Flight Advocacy and Outreach, one of the local organizations and nonprofits that has been assisting in the search for Lina.

San Antonio Police Chief Bill McManus tweeted on Saturday that there has been “no pause” in the efforts to find Lina.

“SAPD continues to work with the FBI to find Lina Sardar Khil who went missing on Dec 20. The investigation is on-going. Pls report any info no matter how insignificant you may think it is,” he wrote, urging the public to call SAPD Missing Persons Section on 210-207-7660.

Asked if there are any updates on Tuesday, police did not immediately respond to ABC News’ request for comment.

Lina’s family is part of an Afghan refugee community in San Antonio. They arrived in the United States in 2019 and speak Pashto.

Lina’s mother, Zarmeena Sardar Khil, is pregnant with her second child. She spoke with FOX 29 in San Antonio through a translator earlier this month.

“We all have the same pain, it doesn’t matter that I am from Afghanistan, I have a different culture, different religion. What we have in common is the pain of motherhood as a human, is the same as all people,” she said.

Lina has brown eyes and straight, brown hair, and was last seen wearing a black jacket, red dress and black shoes, according to police.

Last month, Allen’s organization shared a newly surfaced photo taken by a family member of Lina the day she disappeared in hopes that details about Lina’s jewelry could assist the public in identifying her.

In the photo, which was obtained by ABC News, Lina appears to be wearing blue bangle bracelets on one wrist and gold-toned bangles on the other. She is also wearing small gold earrings and an article around her neck that Allen said is known as the Taweez, which is etched with verses from the Quran and is usually worn for protection.

Police are urging anyone with information regarding Lina or her whereabouts to come forward and contact the missing persons unit in San Antonio at 210-207-7660.