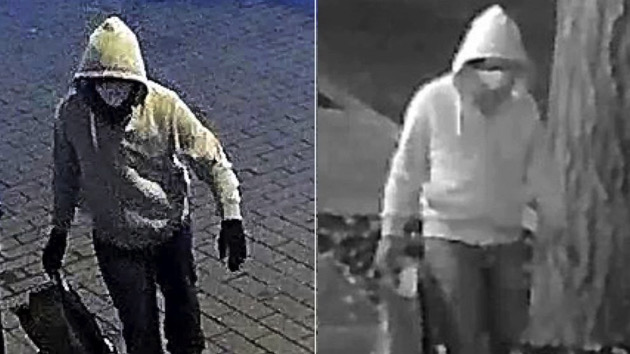 (WASHINGTON) — Law enforcement is raising the reward to $500,000 for any information leading to the arrest of the suspect accused of placing two pipe bombs outside Democratic and Republican national headquarters a day before Jan. 6.

The announcement comes two days before Friday’s second anniversary of the attack on the U.S. Capitol.

Nearly two years ago, wearing a sweatshirt with the hood pulled up, a pair of Air Max Speed Turf shoes with a yellow Nike logo, a backpack and gloves, a suspect walked through Capitol Hill alleyways equipped with what investigators say were two live pipe bombs.

Starting around 7:30 p.m. the night of Jan. 5, 2021 that hooded figured placed those pipe bombs outside the Democratic National Committee and Republican National Committee. They did not detonate, but the case has vexed federal and local law enforcement ever since.

“They would have exploded. They could have exploded,” Steven D’Antuono, the former assistant director in charge of the FBI’s Washington Field Office told ABC News Chief Justice Correspondent Pierre Thomas last year. “They are viable devices that could have gone off and exploded, causing a lot of serious injury or death.” D’Antuono has since retired from the FBI.

Both the DNC and the RNC are close to the U.S. Capitol.

“Although these bombs did not detonate, it is important to remember the suspect walked along residential and commercial areas in Capitol Hill just blocks from the U.S. Capitol with viable pipe bombs that could have seriously injured or killed innocent bystanders,” a press release from the FBI Washington Field Office says. “Moreover, the suspect may still pose a danger to the public or themselves.”

“For two years, a dedicated team of FBI agents, analysts, and law enforcement partners have been tirelessly reviewing evidence and digital media related to this case,” said David Sundberg, assistant director in charge of the FBI Washington Field Office.

To date, the FBI has conducted approximately 1,000 interviews, visited more than 1,200 residences and businesses, collected more than 39,000 video files, and assessed nearly 500 tips.

The discovery of the bombs was particularly concerning because then Vice President-elect Kamala Harris had a meeting at the DNC on Jan. 6.