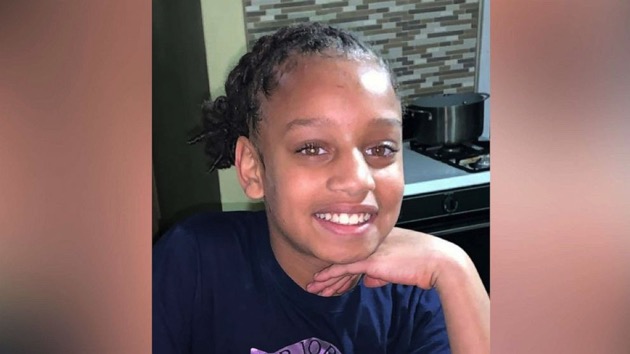 (DAVENPORT, Iowa) — Human remains that were found in rural Iowa last week belong to a 10-year-old girl who has been missing for almost nine months, authorities said Wednesday.

Breasia Terrell, who would have turned 11 in December, was last seen alive in the early morning hours of July 10 in her hometown of Davenport, about 55 miles southeast of Iowa City. She had spent the night at an apartment belonging to her half-brother’s father, 48-year-old Henry Dinkins, according to police.

A few days later, authorities issued an Amber Alert for Breasia and named Dinkins a person of interest in her disappearance. The Federal Bureau of Investigation also announced a reward of up to $10,000 for information related to the case.

The Amber Alert was cancelled in January after months of no new information. Then on March 22, local residents discovered unidentified human remains in a rural area near DeWitt, about 22 miles north of Davenport.

An autopsy was conducted to identify the remains, and the results were announced Wednesday by Davenport Police Chief Paul Sikorski.

“We’ve received confirmation that the remains are those of Breasia Terrell,” Sikorski said at a press conference, his voice wavering with emotion.

“This news is heartbreaking to both Breasia’s family and our Davenport community,” he continued, while fighting back tears. “Our deepest sympathies and heartfelt prayers are with all of those who are affected by this tragic loss. As this case turns from a missing child to a homicide investigation, we know our community is anxious for information regarding the investigation and any charges that may be forthcoming.”

Investigators have been in “constant contact” with the little girl’s family, speaking with them “almost daily,” according to Sikorski.

“This is a very tragic and emotional time for them, and they need our community’s support,” the police chief told reporters, noting that local social service agencies are providing counseling to all those impacted.

Breasia’s disappearance and death is being jointly investigated by the Davenport Police Department, the Iowa Department of Public Safety’s Division of Criminal Investigation as well as the FBI. Although the case is now officially being called a homicide investigation, Sikorski revealed that investigators have been treating it as such for the past several months.

“I can tell you, you know, they’re affected by this as well, deeply,” he said of the investigators. “You know, it’s a 10-year-old girl.”

No arrests have been made in the case so far, and investigators don’t have a timeline for possible charges, according to Sikorski.

“I want to assure our community that when we are able to share details on this investigation, we will,” he said.

Dinkins, the person of interest, is currently incarcerated on unrelated charges, according to Sikorski.

Court and jail records show Dinkins has a lengthy criminal history and is a registered sex offender who was convicted in 1990 of third-degree sexual abuse involving a minor when he was 17. He was most recently jailed in Iowa’s Scott County for allegedly operating under the influence and on charges of violating the sex offender registration’s requirements, according to the court records.

Dinkins has pleaded not guilty, and a trial is set for May 10, according to the Des Moines Register.