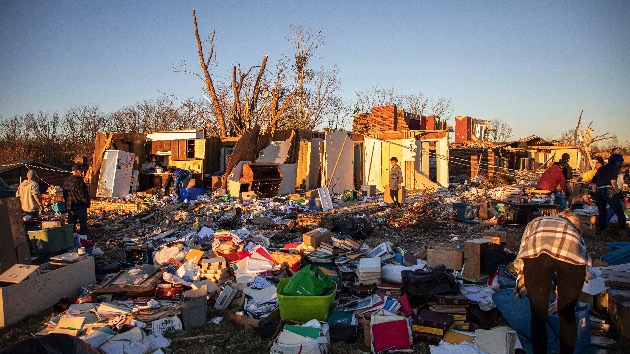 (NEW YORK) — A storm system that spawned possibly multiple tornadoes across America’s heartland on Wednesday night — rare for December — has left a trail of destruction and hundreds of thousands without power.

At least five people were killed in the storms, according to The Associated Press, including three in Kansas killed in car crashes caused by blinding dirt kicked up by the strong winds.

At least 23 tornadoes were reported across four states — Iowa, Nebraska, Minnesota and Wisconsin — between Wednesday and Thursday, with at least six so far confirmed by the National Weather Service.

As of 6 p.m. ET on Thursday, more than 332,000 customers were without power across the Midwest, with Michigan and Wisconsin accounting for the highest volume of outages, according to data collected by PowerOutage.US.

A twister touched down in Plainview, Minnesota, just outside Rochester, on Wednesday evening, after tornado threats were issued for Iowa, Minnesota and Wisconsin, according to the National Weather Service. It was the first time Minnesota recorded a tornado in December, and the first-ever tornado watch and tornado warning to be issued for the state in December.

Wisconsin saw its first December tornado since 1970, with two so far confirmed, including an EF-2 in Neillsville.

The nearby Rochester Fire Department said in a statement on Facebook that its officers had a “busy night” responding to 35 calls for help during the “record storm and wind gusts.” Incidents included multiple small fires, gas leaks, downed power lines and other hazards caused by falling trees. The most significant event was a burning transformer on a power pole that spread to a nearby detached garage, setting the structure ablaze. There were no injuries and the nearby home was not impacted by the fire, Rochester police said.

A tornado was confirmed in Hartland, Minnesota, about 65 miles southwest of Rochester. About 35 to 40 houses in the surrounding Freeborn County were damaged, mostly minor, with Hartland being the worst-hit city. Commercial buildings in the area suffered “substantial damage” and several power lines were knocked down, according to the Freeborn County Emergency Management. There were no storm-related injuries.

Meanwhile, extensive storm damage was reported in Stanley, Wisconsin, where a tornado was confirmed. The Stanley Police Department said in a statement on Facebook that the storm resulted in property damage throughout the city but no injuries.

“Daybreak will reveal the true extent of damages within the city,” Stanley police said, “but we are certain this storm will bring out the true definition of community as we begin to recover and move forward.”

The storm system, along with a cold front, will stall over the Mid-South and Ohio Valley regions over the next few days, bringing heavy rain to some states in the Midwest and South that were hit hard by deadly tornadoes last weekend, according to the latest forecast from the National Weather Service.

Multiple tornadoes are unusual for December in the United States. While twisters can happen any time of year, the greatest threat is typically in spring and summer with the peak season on the earlier side for more southern states, according to the National Oceanic and Atmospheric Administration.