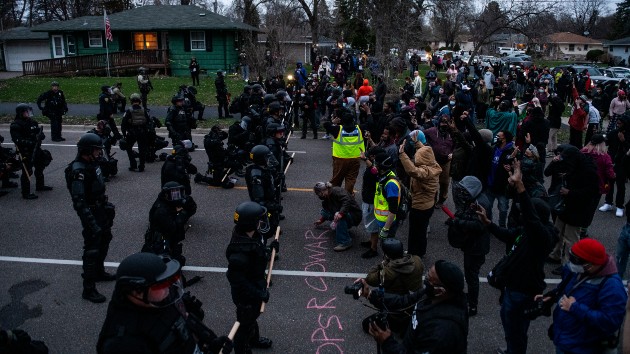 The incident unfolded around 2 p.m. local time, when officers initiated a stop for a traffic violation in the city in Minnesota’s Hennepin County, about 10 miles northwest of Minneapolis. During that time, the officers determined the driver of the vehicle had an outstanding warrant, according to Brooklyn Center Police Chief Tim Gannon.

“At one point as officers were attempting to take the driver into custody, the driver re-entered the vehicle,” Gannon said in a statement Sunday. “One officer discharged their firearm, striking the driver.”

The car traveled several blocks before crashing into another vehicle. The passengers in the other car were not injured, according to Gannon.

Officers and medical personnel “attempted life saving measures” on the driver who was shot, Gannon said, “but the person died at the scene.”

The Hennepin County Medical Examiner’s Office will release the identity of the deceased individual following a preliminary autopsy and family notification.

Gannon said the officers were wearing body cameras and that the Minnesota Department of Public Safety’s Bureau of Criminal Apprehension is investigating the incident.

A female passenger who was also in the vehicle with the person shot sustained non-life threatening injuries during the crash, according to Gannon. She was transported to North Memorial Health Hospital in Robbinsdale, a few miles south of Brooklyn Center.

Although authorities have not yet released the victim’s identity, Minnesota Gov. Tim Walz and Brooklyn Center Mayor Mike Elliott have both released statements naming him as 20-year-old Daunte Wright.

Wright’s mother, Katie Wright, also confirmed that her son was the person who was fatally shot. She said she was on the phone with him before he was killed.

“I heard scuffling and I heard the police officers say, ‘Daunte, don’t run.’ And then the other officer said, ‘Put the phone down,’ and hung it up,” Katie Wright told reporters on Sunday. “And a minute later, I called and his girlfriend answered — that was the passenger — and said that he’d been shot, and she put [the phone] on the driver’s side and my son was laying there lifeless.”

In a statement to ABC News, Wright’s family described him as a young father who “had a whole life ahead of him.”

“We just want people to know Daunte was a good kid,” Wright’s family said in a statement. “He loved being a father to Daunte Jr.”

“Daunte had a smile to make anyone’s heart melt. He was definitely a jokester, he loved to joke with people, especially his brothers and sisters,” the family added. “He did not deserve this.”

John Harrington, commissioner of the Minnesota Department of Public Safety, said there were around 100 people at the scene who were “highly agitated” when investigators from the Minnesota Bureau of Criminal Apprehension responded. The crowd was asked to disperse and did so shortly thereafter, as more agencies arrived on scene to coordinate a response to the protesters.

Later, crowds of 100 to 200 people marched toward the Brooklyn Center Police Department headquarters, according to Harrington.

“We saw rocks and other objects thrown at the police department. There were reports of shots fired in the area of the police department,” Harrington said at a press conference late Sunday night. “Within hours of that, a secondary group we heard was at the Shingle Creek mall or business center and we have reports of approximately 20 businesses that were broken into during that period.”

Authorities declared the demonstration outside the police department an unlawful assembly and gave the crowds a 10-minute warning to clear out. Aerial footage obtained by ABC News shows police forming a perimeter around the building.

About 25 minutes later, officers started firing rubber bullets and flash bangs to disperse protesters remaining in the area. No injuries have been reported, and it is unclear if any arrests have been made.

The crowd at the police department had largely dispersed as of late Sunday night, though there were still “some pockets of individuals,” according to Harrington.

Minnesota is mobilizing its National Guard to Brooklyn Center at the request of local authorities.

The National Guard is already deployed in Minneapolis for the ongoing trial of Derek Chauvin, the former Minneapolis police officer accused of murdering George Floyd, an unarmed Black man who died on May 25 after Chauvin was filmed kneeling on his neck as other officers stood by.

“At this time, we have essentially a full activation,” Harrington said. “You will see a robust assortment of National Guard, state and local police departments working together over the next two or three days as we once again prepare for the trial and also are prepared for any other and any further civil unrest that may come from the Brooklyn Center officer-involved shooting today.”

Col. Matt Langer of the Minnesota State Patrol told reporters that the public can expect to see “a greater law enforcement presence, a greater National Guard presence” in and around Minneapolis on Monday.

Shortly after midnight, the Brooklyn Center mayor issued a citywide curfew that will remain in place until 6 a.m. local time on Monday. Elliot called for calm in the community and for authorities not to use force on peaceful protesters

“Our entire community is filled with grief following today’s officer-involved shooting of Daunte Wright, a 20 year-old young man,” Elliot said in a statement. “We continue to ask that members of our community gathering do so peacefully, amid our calls for transparency and accountability.”

Minnesota’s governor will hold a press conference Monday morning to address the shooting and civil unrest, according to his office.

“I am closely monitoring the situation in Brooklyn Center,” Walz wrote on Twitter Sunday night. “Gwen and I are praying for Daunte Wright’s family as our state mourns another life of a Black man taken by law enforcement.”

Metro Transit, the main public transportation operator in the Minneapolis-Saint Paul area, announced Sunday that it was shutting down public transit in Brooklyn Center at the request of law enforcement.

Brooklyn Center Community Schools announced that schools will be closed Monday due to the civil unrest, but classes will be held virtually.

“All students in grades E-12 will be in distance learning on Monday, April 12. Our school buildings will also be closed for the day. All programs, including Centaur Plus and Centaur Beginnings, and all after-school activities are also canceled,” Carly Baker, superintendent of Brooklyn Center Community Schools, said in a statement Sunday. “This decision is being made out of an abundance of caution following the officer-involved shooting that took place in Brooklyn Center earlier today and not knowing what will unfold overnight in our community.”

Baker added that she hasn’t “entirely processed the tragedy that took place in our community” and is therefore prioritizing the safety and well-being of the students, their families, the staff members and the community members.

On Monday, school staff will be focused on helping students cope with the “trauma” from the shooting, according to Baker.