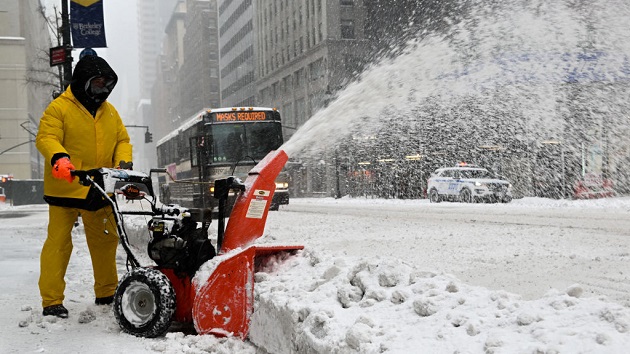 (NEW YORK) — Millions of Americans are under winter weather alerts Saturday as a nor’easter slams the Northeast.

Whiteout conditions persist as the winter storm makes its way toward the New England coast. Parts of New Jersey, including Atlantic City, saw snowfall rates upwards of 2 inches per hour, while eastern Connecticut saw a rate as fast as 3 inches per hour.

In addition to the snowfall, strong wind gusts of 60 to 70 mph have been reported along the Northeast coastline.

State of emergencies are in effect in several states as they brace for the worst of the storm system on Saturday afternoon.

Whipping winds, treacherous travel, potential power outages and frigid temperatures are all concerns associated with the winter nor’easter. Nearly 120,000 customers are without power in Massachusetts, and over 3,550 flights have been canceled within, into, and out of the U.S. Saturday, according to Flightaware.

In Connecticut, airports are “down at this point,” Gov. Ned Lamont said during a briefing midday Saturday. Metro-North is running on limited hourly service, and Amtrak is not operating, officials said.

By Saturday afternoon, over a foot of snow had so far fallen along the Northeast coast, with parts of New Jersey and Long Island reporting over 18 inches.

Additional snow accumulations of 3 to 6 inches are forecast from eastern Long Island up into central New England, while another 6 to 12 inches is expected along the New England coast.

The I-95 corridor north of New York City toward Boston and Portland, Maine, are under major impacts, with whipping winds gusting 45 mph to 70 mph near the Boston Metro.

Parts of the Great Lakes and New England will experience bitterly cold temperatures with wind chills near 25 below zero.

The Northeast will feel frigid Saturday night as wind chills plunge to 2 and 5 below zero in New York City and Boston, respectively.

Cold weather is even heading south to Florida with temperatures dipping into the upper 20s by early Sunday. Wind chill alerts have been posted for cities including Miami, Naples and West Palm Beach. Freeze warnings are in effect for much of Florida Saturday night.

There are coastal concerns about storm surge and tidal influence especially along the coastal towns in Suffolk County, New York, which could see 4- to 8-feet waves during high tide Saturday night into Sunday morning.

Boston may also get battered with largest wave swells at 15 to 20 feet.

Beach erosion, localized flooding and property damage are all possible in these areas with the storm and high tides.

However, there is one silver lining to this winter storm: The storm system remained easterly, meaning less heavy snow and weather-related snarls for states west of Interstate 95.

The storm system is expected to move out of New York City by the afternoon and from Boston by the evening.