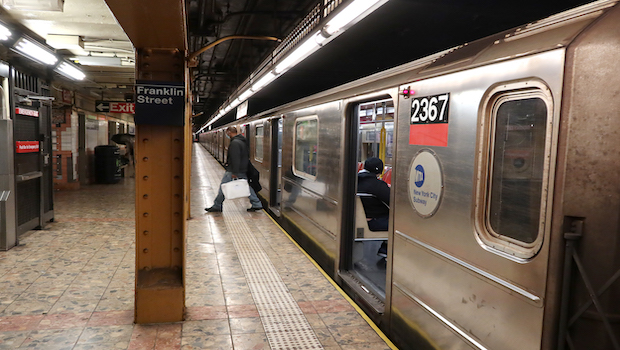 (NEW YORK) — Police are seeking a suspect in an assault on a New York City subway train that is being investigated as a hate crime after the assailant allegedly used an anti-gay slur.

The New York Police Department recently released video and images of the attack, which it said occurred March 19 on an uptown A train in Manhattan.

“The unidentified individual sat across from the victim and stated ‘I wish I had my pepper spray’ before spitting at him,” the NYPD said in a statement.

The suspect then reportedly said, “I have to start carrying my pepper spray” before spitting at the victim again, police said.

When the victim stood up, the assailant “charged” at him and “grabbed him by the hair before punching him several times in the face and head,” police said.

An apparent cellphone video of the attack released by police showed the perpetrator punching the victim on the moving train.

“The perpetrator then ripped hair from the victim’s head and stated ‘I’m sick of all you f—,"” police said.

The victim was transported to a nearby hospital in stable condition with cuts to his head, the NYPD said. He also lost hair during the attack.

The NYPD’s Hate Crime Task Force is investigating the incident.

Police are also seeking a suspect in a separate subway attack that occurred Wednesday afternoon at a station in Manhattan. The suspect slashed a 47-year-old man on the arm before fleeing the Wall Street 2-train station, police said.

The city has increased the police presence in the subways in an effort to reduce crime in the public transit system since Mayor Eric Adams took office earlier this year. The killing of 40-year-old Michelle Go, who died after a stranger pushed her in front of an oncoming train, drew further attention to subway safety concerns.

“While we are by no means out of the woods, and there is a lot of progress that needs to be made on subway safety, I just want to acknowledge that the work has begun,” MTA Chairman and CEO Janno Lieber said at an MTA board meeting Wednesday. “Serious effort is underway.”

Anyone with information on the incidents is asked to call the NYPD’s Crime Stoppers Hotline at 1-800-577-8477 or online at crimestoppers.nypdonline.org.