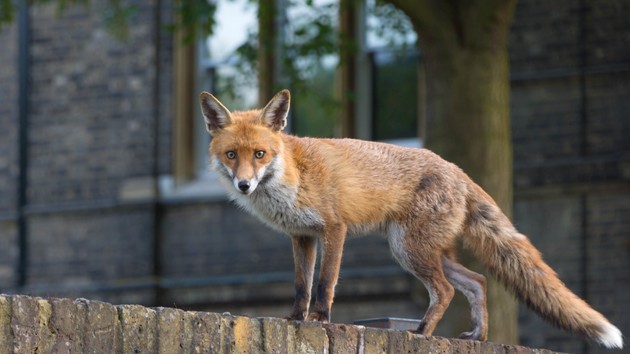 (WASHINGTON, D.C.) — The return of tourists to Capitol Hill — and their discarded food and trash — should have been a “telltail” sign.

“We have received several reports of aggressive fox encounters on or near the grounds of the U.S. Capitol,” Capitol Police tweeted at 12:50 p.m. on Tuesday. “For your safety, please do not approach any foxes. Animal Control Officers are working to trap and relocate any foxes they find.”

A Capitol Police spokesman told ABC News that a fox “bit or nipped” at least six people, including one lawmaker.

The office of the House Sergeant at Arms had also warned lawmakers in a memo about the fox reportedly biting people and said: “There are possibly several fox dens on Capitol Grounds.”

Pictures of the cute — but potentially dangerous — creature first popped up on social media on Monday. The fox was spotted scavenging on the streets nearby Tuesday afternoon, despite the area being crowded with tourists now that the Capitol complex reopened to the public last month after being mostly closed for two years because of the pandemic.

After workers spent hours trying to find the animal in question, Capitol Police tweeted a photo at 3:36 p.m. of the culprit in a cage with the line “Captured.”

Some on the internet were quick to call for the fox — who was captured with the help of the Humane Rescue Alliance — to be freed. One social media account cosplaying as the “Capitol Fox” also appeared on Twitter Tuesday, even releasing a statement on what the fox called its “illegal arrest.”

“As a fox, I cannot speak. And too often — I have nobody to speak for me. They mock me in songs, they wear me as clothes, and they hunt me down like a criminal in my home. For what, I ask you?” the statement said.

Notably, foxes are susceptible to rabies and can transmit the disease to humans, according to the Centers for Disease Control and Prevention — a fact one lawmaker knows now all too well.

While Sen. Joni Ernst, R-Iowa, told reporters she had a close encounter with the fox Monday evening and showed a video she took of the usually nocturnal animal, for Rep. Ami Bera, D-Calif., the encounter was far closer: Bera was bitten.

The congressman’s office confirmed that he was “nipped on the leg” in a statement to ABC News and admitted to Walter Reed National Military Medical Center where he received several shots.

Bera, who is a physician, tweeted a warning a light-hearted warning about his close call.

What does the fox say? Last night, I found out…

Joking aside, animal bites are extremely serious. In the case of an encounter, please speak with a physician immediately: https://t.co/J4tmdlZzQI.

Happy to report that I am healthy and back at work serving the people of #CA07. https://t.co/rNX85ItmrK

ABC News has inquired about the fate of the fox, but no news yet.