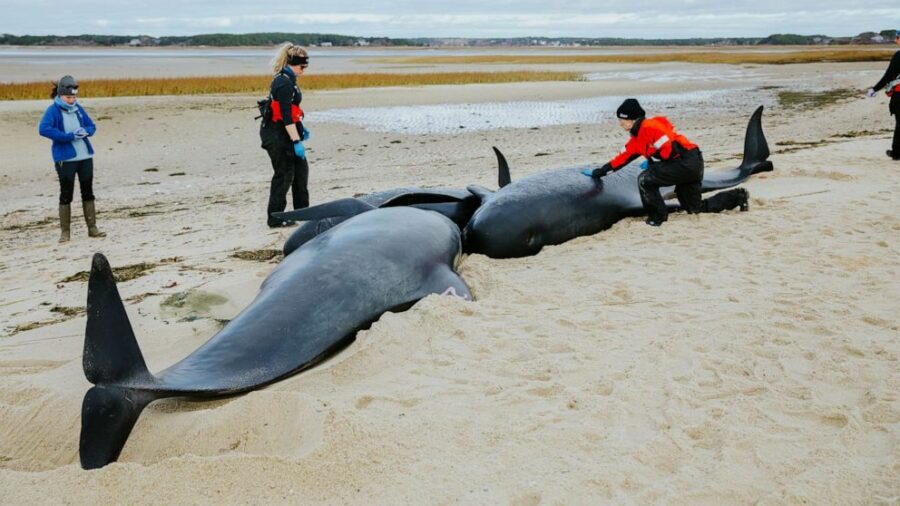 (EASTHAM, Mass.) — A group of pilot whales that were stranded on a Massachusetts beach have been returned to the ocean, but they may still be in peril, according to experts.

By Tuesday morning, the whales had become stranded on the beach, and one — a calf — had died, Hedman said. After the whales were briefly examined, and two were given satellite tags, the conservationists hoped the high tide in the afternoon would help push the marine mammals back into the ocean.

The five remaining pilot whales were re-floated and released shortly after the tide came in, but by 6 p.m. Tuesday, four of the whales had turned back toward shore, and rescue efforts were temporarily put on hold, the organization said.

“The five pilot whales swam off well in one direction together, but the reality is that we cannot celebrate a success yet this evening,” Misty Niemeyer, stranding coordinator at IFAW, said in a statement. “One animal is now offshore, but the others did not follow.”

The conservationists monitored satellite tag hits overnight, and a field team was able to locate the majority of the animals about 2 miles north near the Mass Audubon Wellfleet Bay Wildlife Sanctuary in Wellfleet, Massachusetts, Hedman said. One whale is now offshore, she added.

The team is evaluating the next steps, Niemeyer said, describing the rescuers as “exhausted” after their strenuous efforts Tuesday.

“Large animals can be quite dangerous to work around, and it’s for our health as well as tomorrow’s continued efforts that we need to call it a day today,” she said late Tuesday.

Teams of rescuers were responding in phases Tuesday to provide supportive care until the tides were more favorable, Hedman said.

Video taken on the scene showed crews digging up sand around the whales, some of which were covered in wet blankets to help them retain moisture. Some of the whales were also administered fluids via IV to help combat the stress and shock of stranding, Sharp said.

Dolphins and small whales can indeed live out of water for many hours when receiving proper supportive care and hydration, Hedman said.

While Cape Cod is considered a global hotspot for live cetacean stranding, historically, pilot whales do not strand there, Hedman added.

IFAW typically transports dolphins to deeper water using a custom-built rescue vehicle, but the whales are too big to transport, according to the organization.

But some of the animals are “very large,” with the largest estimated to weigh about 4,000 pounds — making them too heavy to transport, Brian Sharp, director of the research center, said in a recorded statement.

“[We’re] doing everything we can right now to give these animals the best shot at the best outcome,” Sharp said.