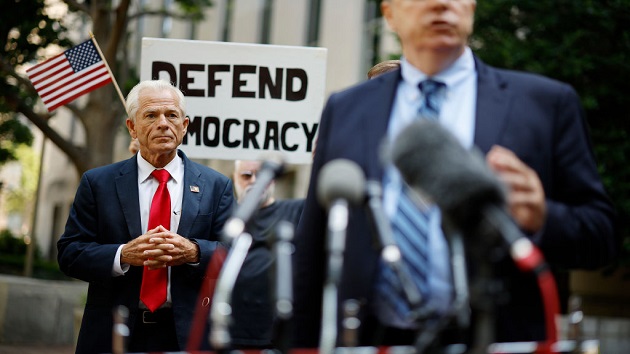 (WASHINGTON) — Former Trump White House adviser Peter Navarro entered a plea of not guilty Friday to two charges stemming from his failure to comply with subpoenas from the House select committee investigating the Jan. 6 attack on the U.S. Capitol.

Navarro was represented by his new defense attorneys, John Irving and John Rowley, who were retained by Navarro as counsel on Thursday. Navarro was previously pro se and representing himself.

“The latter part of the year is going to be … a time where [Navarro’s] going to be on the road a lot and trying to promote that book, which is important to him in terms of income and whatnot,” Irving said. “So it’s not a trivial thing.”

“No, I’m not suggesting it is,” Mehta replied. “On the other hand … I’ve got also the public interest [to take] into account in terms of moving this case forward.”

A federal prosecutor said during the arraignment that “delaying this trial to early next year, potentially April, would be clearly unwarranted given the facts and issues in this case,” and argued that a book tour does not justify such a delay.

The House voted in April to hold Navarro in contempt over his refusal to cooperate with the Jan. 6 probe.

Earlier this month, Navarro failed to comply with a federal grand jury subpoena calling for him to appear at U.S. District Court in Washington, D.C.

Navarro was indicted on June 3 on charges of contempt of Congress. The Justice Department previously returned a similar indictment against former White House strategist Steve Bannon after the House voted to hold him in contempt last year.

According to court documents, Navarro dropped a civil lawsuit he had filed last month against the U.S. attorney in Washington, D.C., and other parties, after he had received a grand jury subpoena related to the House’s contempt referral. However Rowley, speaking to reporters following Friday’s hearing, said his team might review the lawsuit and refile it after additional consideration.