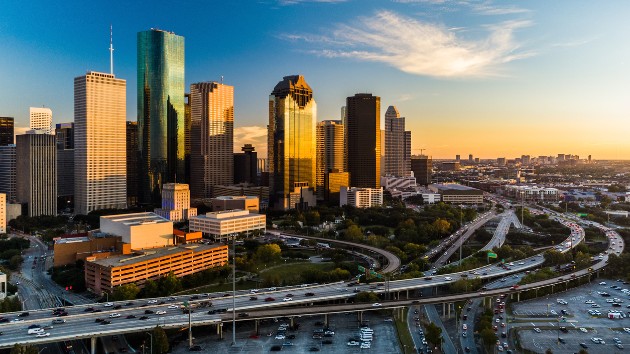 (HOUSTON) — The hometown of George Floyd dedicated a street mural that the city’s mayor said will serve as a permanent reminder that the death of the 46-year-old Black man at the hands of Minnesota police officers was “not in vain.”

The colorful two-block long mural was unveiled during a ribbon-cutting ceremony Saturday on a road in front of Jake Yates High School, Floyd’s alma mater. The artwork features the words “Black Lives Matter” and the red and gold No. 88 jersey Floyd wore as a standout player on the high school football team.

“This [artwork] is another public statement that the life and death of George Floyd is not in vain,” Houston Mayor Sylvester Turner said during the dedication ceremony, adding that the image of Floyd begging for life as an officer dug his knee into the back of his neck “is still being resonated throughout the globe.”

Members of Floyd’s family were on hand to help dedicate the massive mural on Alabama Street in Houston’s Third Ward neighborhood.

“This means a lot to my family and I know it would mean a lot to my uncle,” Floyd’s niece, Bianca Williams, said of the mural. “Continue to stand with us. This is the beginning of a long fight, united together stronger than ever.”

As the dedication ribbon was cut, those in attendance said Floyd’s name in unison and released red and gold balloons. The ceremony also featured a motorcycle procession and a performance by the Texas Southern University drumline.

A viral cellphone video of Floyd’s fatal arrest on May 25 showed former Minneapolis police officer Derek Chauvin with his knee on the back of Floyd’s neck while he was handcuffed and prone on the ground next to a police patrol vehicle.

The footage showed Floyd repeatedly crying out “I can’t breathe” until he went unconscious. He was taken to a hospital, where he was pronounced dead.

All of the officers involved in the fatal arrest were fired from the Minneapolis Police Department and charged in Floyd’s death. The officers confronted Floyd outside a grocery store after receiving a report that Floyd allegedly used a phony $20 bill to purchase cigarettes.

The release of the video on social media set off massive protests across the country and globe, including several that led to looting and burning of businesses and violence directed at police.

None of the officers have yet to enter a plea.