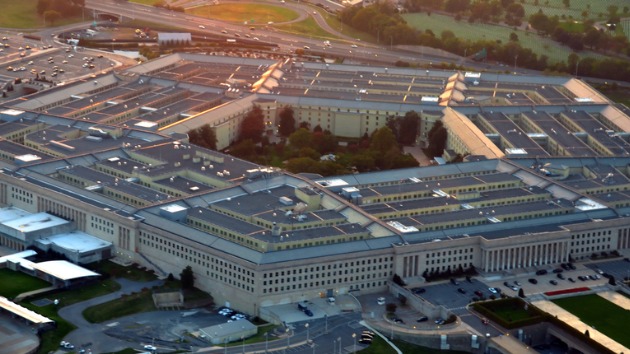 (WASHINGTON) — The Pentagon police officer charged with murder for allegedly killing two people in Maryland this week also pulled a shotgun on a homeless woman in his apartment lobby last year, police said.

He was off-duty at the time of the shooting, which took place shortly after 5 a.m. Wednesday, in the parking lot of the Takoma Overlook Condominiums, according to police.

Footage from May 2020 obtained by ABC affiliate WJLA appears to show Dixon using a gun to confront a homeless woman who entered the lobby of his apartment building. Police confirmed that they reported to the apartment

Dixon appeared to retrieve a long gun and then point it at the woman while telling her to leave, according to WJLA. Video footage appeared to show him pointing it near her face and she rushed to leave. No shots were fired.

Takoma Police announced in a Friday release they will file criminal charges against Dixon for allegedly assaulting the woman in the incident.

Officials said Takoma Police were called to an apartment building to investigate a report of a homeless individual swinging sticks at people on May 6, and they interviewed Dixon upon arrival. Police said he told them a woman was blocking access to the building, and he told officers he went to his apartment to retrieve his pepper spray and concealed weapon.

Police said there was evidence in the lobby that pepper spray had been deployed. Dixon didn’t mention any use of a gun to officers, but said he pepper-sprayed the woman, according to authorities.

Officers found the woman and confirmed that she’d been pepper-sprayed. They said she also appeared to be in a “mental crisis” and soon was transported for emergency evaluation.

Following that incident, police contacted the Pentagon Protection Force Police to make them aware of the incident and Dixon’s alleged use of force outside his jurisdiction. It was investigated by Pentagon Police.

“A review of all body-worn camera footage related to the incident revealed at no time during the interview with officers or at anytime during our investigation did Mr. Dixon mention he deployed a shotgun against the involved female,” a police statement said.

Police said they were never made aware, by Dixon or anyone else, of his alleged use of the shotgun, nor was the department aware that video of the incident existed until Friday.

In the Wednesday Takoma Park shooting, Dixon said that he thought he saw a car break-in and he “engaged the suspects who failed to follow his direction,” according to police. He said he “discharged his weapon” when those suspects tried to flee, police added.

However, in a Friday press conference, Chief of Police Antonio DeVaul said Dixon’s descriptions of events were “inconsistent.”

“Our investigation revealed that Mr. Dixon’s overview of events was inconsistent with the facts in the case,” DeVaul said. “And that Mr. Dixon had no lawful or justifiable reason to shoot and kill Mr. Williams and Mr. Johnson.”

It’s unclear whether Dixon has obtained an attorney.