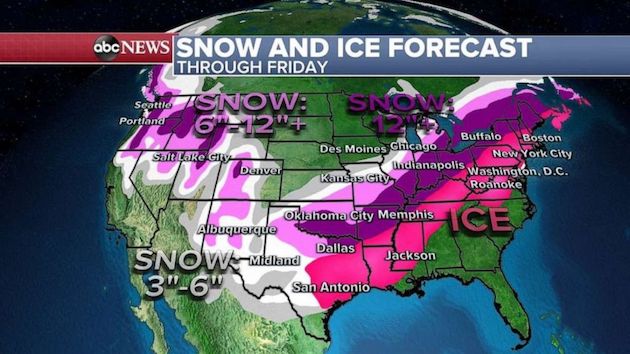 (NEW YORK) — The major winter blast that is gripping the nation will reach its peak beginning today and lasting through much of the week with two major storms to track along with the Arctic air surging into the southern U.S.

Seattle recorded 11.1 inches of snow on Friday and Saturday which is a top 10 two-day snowfall for the city.

On Saturday alone, Seattle recorded 8.9 inches of snow which made it the snowiest day for the city since 1969, 52 years ago.

In Portland, significant freezing rain accumulation, with locally up to 1 inch of freezing rain and sleet, caused widespread power outages and dangerous roads.

On the East Coast, Virginia and much of the state stretching into Maryland saw over a half inch of freezing rain and sleet on Saturday.

The National Weather Service in Wakefield, Virginia, is calling this likely the worst ice storm in 20 years for the region.

In northern Minnesota on Saturday morning, an actual low temperature of -48 degrees was recorded.

The widespread winter weather is already causing hundreds of thousands of power outages.

At least 46 states now have weather alerts due to this major winter blast and two more major storms to track.

Today the main action will be in the southern U.S. as heavy snow is already moving to parts of southern Plains along with freezing rain and sleet across Texas.

Severe storms will be possible across parts of Florida with tornadoes possible from Tampa to Jacksonville.

Roads will become increasingly dangerous through the southern Plains today from Houston to Austin to Dallas and Oklahoma City.

By Sunday night, the heaviest snow will be from Dallas to Oklahoma City and the heaviest wintry mix will be near Austin and San Antonio.

By Monday, heavy snow, freezing rain and sleet will be falling from Houston into Louisiana which will make the morning commute incredibly difficult and road conditions will be extremely dangerous there.

Another area of heavy snow, sleet and freezing rain will be falling across parts of the Midwest and into the Appalachians.

By Monday night, the heavy snow will overtake the Ohio and Tennessee Valley and there will be an area of wintry mix moving into the Northeast and impacting metro areas from Philadelphia to Boston.

On Tuesday morning, very heavy snow will be falling in in the interior Northeast and a wintry mix will be possible from Philadelphia to New York City and Boston.

Some of the latest computer guidance is suggesting that the major cities themselves will be just at or near freezing during this time frame.

While ice accumulation will be possible in the major cities, significant ice accumulation is expected north and west of Philadelphia, New York City and through much of southern New England.

Immediately after this storm, attention will turn to another major storm that will follow a very similar track.

Through Friday, snow accumulations from both storms could exceed a foot from northern Texas to New England.

In addition, fallen trees and power lines become a major concern and we could be seeing a situation for parts of this week that includes widespread power outages across large parts of the U.S.

In addition, all this winter weather is likely to continue to cause COVID-19 vaccine facilities to face delays and closures across large regions of the country.

All of this active weather is being fueled by a major Arctic blast that will surge south towards the Gulf of Mexico this week.

There will be widespread record lows across the central U.S. on Monday and Tuesday.

In the Southern U.S., particularly Texas and Louisiana, the wind chills will be absolutely brutal since this region does not usually see cold weather of this magnitude.

The good news is, by Saturday of this week, the weather pattern looks to become more stabilized and a period of quieter weather should begin.