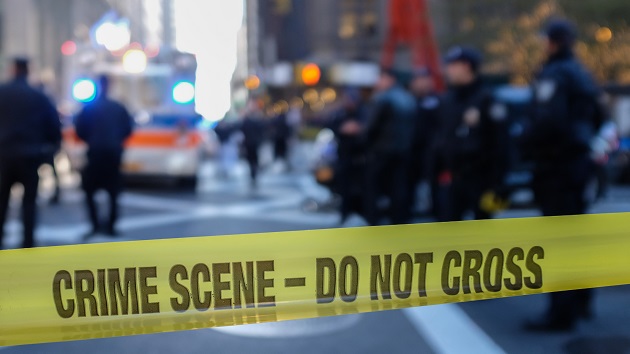 (DALLAS) — A man who was recently paroled after serving a sentence for robbery is now facing capital murder charges stemming from Saturday’s shooting at a Dallas hospital that left two employees dead, including a nurse, officials said.

Hernandez was paroled on Oct. 20, 2021, after serving a prison sentence for aggravated robbery, according to a spokesperson for the Texas Department of Criminal Justice.

“He was on parole with a special condition of electronic monitoring,” the spokesperson told ABC News.

Hernandez was granted permission to be at the hospital to join his significant other during the delivery of their baby, the spokesperson said, adding that the state Office of Inspector General is working with the Dallas Police Department as they investigate.

According to the arrest affidavit obtained by WFAA, Hernandez accused his girlfriend of cheating on him after she gave birth at the hospital. He allegedly pulled out a handgun and hit her multiple times in the head with it while saying, “we are both going to die today” and “whoever comes in this room is going to die with us.” Then Hernandez allegedly made “ominous phone calls and text messages to his family,” the affidavit states.

Methodist Health System confirmed the incident in a statement, saying its police force as well as the Dallas Police Department responded to reports of an active shooter at Methodist Dallas Medical Center around 11 a.m. local time on Saturday.

“A Methodist Health System Police Officer arrived on the scene, confronted the suspect, and fired his weapon at the suspect, injuring him,” the hospital said. “The suspect was detained, stabilized, and taken to another local hospital.”

The names of the victims were not immediately released.

Both police and the hospital confirmed that the shooting occurred near the Methodist Dallas Medical Center’s mother/baby unit.

“Out of an abundance of caution, police force staffing has been increased on the Methodist Dallas Medical Center campus, including for mothers and babies,” Methodist Health System said in a statement, describing Saturday’s shooting as an “isolated and tragic event.”

The investigation is ongoing, with the Dallas Police Department assisting the Methodist Health System Police.

“The Methodist Health System family is heartbroken at the loss of two of our beloved team members,” the hospital added. “Our entire organization is grieving this unimaginable tragedy.”

Dallas Police Chief Eddie Garcia slammed the “broken” justice system for allowing the suspect out on the streets, where he could allegedly obtain a gun.

“I’m outraged along with our community, at the lack of accountability, and the travesty of the fact that under this broken system, we give violent criminals more chances than our victims,” Garcia said in a statement posted on Twitter. “The pendulum has swung too far.”

“No person should fear for their life for merely going to work, especially a nurse or healthcare worker whose passion is to help others heal,” Bumpus said in a statement. “We hope our legislators understand that we need to protect our healthcare workers.”

Bumpus also released statistics from the U.S. Bureau of Labor Statistics, showing workplace violence has increased during the pandemic, and the risk to nurses was three times greater than “all other professions.”