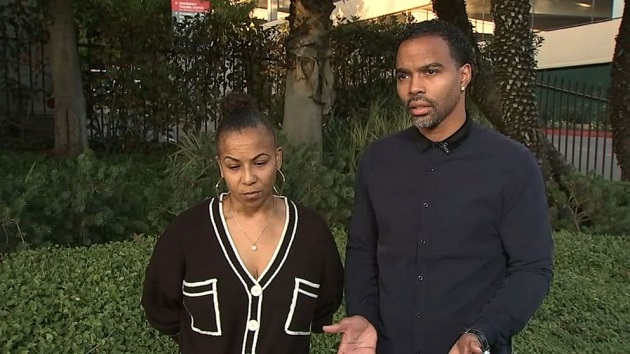 (LOS ANGELES) — A family is pleading for answers a week after they say their daughter was shot in the head while driving on a California highway and remains on life support.

She was heading to meet up with friends at the time, her parents said.

“She said that she would be back in a couple of hours because we were going to decorate our tree,” her mother, Francine Webster, told ABC Los Angeles station KABC.

“This is the call you never want to get. This is the thing as a parent you fear,” Robert Newt, the victim’s father, told KABC. “I pray every night for my kids to be protected.”

Ronni Newt, who was described by her mother as having a “big heart” and a “lot of personality,” was shot in the head and remains in a coma on life support, according to her parents.

“It’s beyond me that something could be said that could actually make you pull out a gun and shoot somebody,” Robert Newt told KABC.

In the week since the shooting, there have been limited leads into what happened and no suspects have been identified, a California Highway Patrol spokesperson said.

Newt’s parents are now urging any witnesses to come forward.

The two have been by their daughter’s side in the hospital daily since the shooting and are praying for her recovery, while also waiting for answers.

“There are a lot of people that love her that are supporting her, that want to see whoever did this to her apprehended,” Webster told the station.

California Highway Patrol said it is seeking any dash-cam videos and recordings taken between 4:45 p.m. and 5:30 p.m. on Dec. 17, northbound and southbound along US-101 from I-405 to Tampa Avenue.