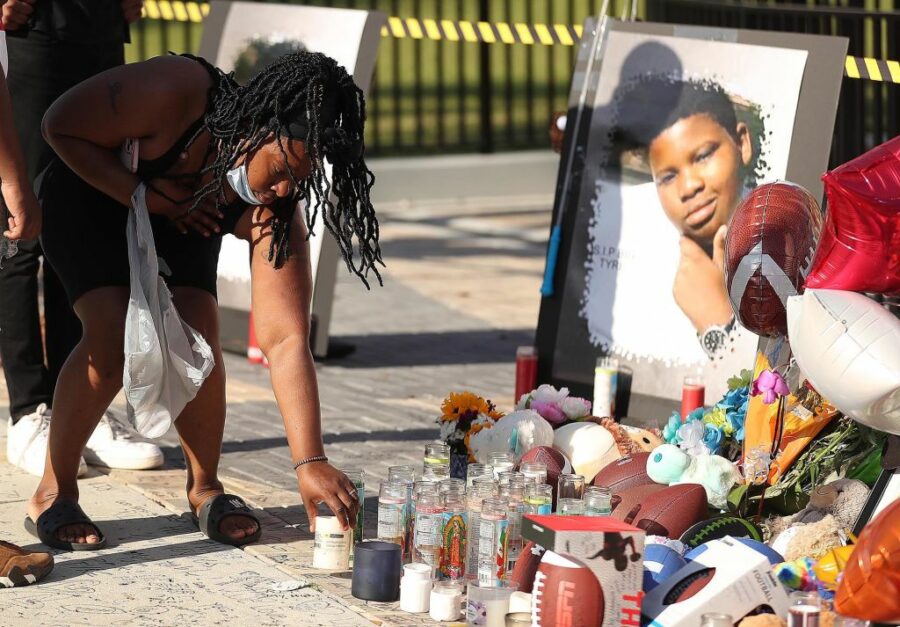 (ORLANDO, Fla.) — The parents of a 14-year-old boy who fell to his death in March from the world’s tallest tower drop ride at a Florida amusement park filed a civil wrongful death lawsuit on Monday alleging park officials failed to warn riders of “unreasonably dangerous and foreseeable risks.”

The tragedy unfolded on March 24 when Tyre Sampson, who was on spring break, slipped out of his seat and fell more than 100 feet to his death, according to the lawsuit.

Sampson’s mother and father, Nekia Dodd and Yarnell Sampson, filed the lawsuit in the 9th Circuit Court in Orange County, Florida, accusing ICON Park in Orlando and other defendants, including the manufacturer and the operator of the FreeFall thrill ride, of negligence.

“Tyre had a long and prosperous life in front of him that was cut short by this tragic event,” the lawsuit states, adding that the teenager was an honor student and football player at his school in St. Louis.

Sampson’s parents are scheduled to hold a news conference with their attorneys Tuesday morning to discuss the legal action.

The lawsuit comes a week after Florida state officials announced the findings of a forensic engineer’s field investigation report on the incident that killed Sampson.

The report showed that the operator of the FreeFall ride, which is the world’s tallest free-standing drop tower at a height of 430 feet, “made manual adjustments to the ride resulting in it being unsafe.”

Nikki Fried, the Florida commissioner of agriculture and consumer services, said the adjustment by the individual operator, who was not identified in the report, enabled the FreeFall’s sensor lights to illuminate, “improperly satisfying” the ride’s electronic safety mechanisms and enabling the ride to operate “even though Mr. Sampson was not properly secured in his seat.”

Fried said the initial permit inspection for the new ride was done in December and no deficiencies were found.

She said the investigation into the incident is ongoing.

Besides the amusement park, the lawsuit names as defendants Extreme Amusement Rides, the ride’s owner and operator that also does business under the name The SlingShot Group of Companies; the ride’s manufacturer, Funtime Handels GMBH of Austria; and Keator Construction, LLC, the general contractor responsible for building the attraction.

Also named as a defendant was the Gerstlauer Amusement Rides, a Germany-based company that manufactured the seats and safety harnesses for the FreeFall.

The state investigation determined that the “normal” restraint opening for seats on the FreeFall ride was 3.33 inches. Sampson’s seat was adjusted before the ride started to an opening of 7.19 inches, the investigation found.

Florida state Rep. Geraldine Thompson, D-Orlando, said at a news conference last week that the manufacturer’s guidelines for the FreeFall specifically say the maximum weight of a rider is 250 pounds.

On the day of the incident, Sampson was 6 feet 2 inches tall and weighed 380 pounds, according to the lawsuit.

The lawsuit alleges that ICON Park and The SlingShot Group “knew or should have known” from its own tests that riders of the FreeFall would be “subject to unreasonably dangerous and foreseeable risks, and that serious injury and death of the occupants in the ride could result.”

ICON Park had no immediate comment on the lawsuit, but a spokesperson told ABC News attorneys for the park are expected to release a statement soon.

Trevor Arnold, an attorney for The SlingShot Group said in a statement released to ABC News on Monday that the company “continues to fully cooperate with the state during its investigation, and we will continue to do so until it has officially concluded.”

“We reiterate that all protocols, procedures and safety measures provided by the manufacturer of the ride were followed,” Arnold said. “We look forward to working with the Florida legislature to implement change in the industry, and we are also supportive of the concepts outlined by State Representative Geraldine Thompson to make changes to state law through the ‘Tyre Sampson Bill’ to prevent a tragic accident like this from ever happening again.”

In a statement last week to ABC News, ICON Park it was “deeply troubled” by the state’s preliminary investigation that found the ride operator misadjusted the harness and safety sensor light on the FreeFall. “ICON Park is committed to providing a safe, fun experience for families. We will continue to support the Florida Department of Agriculture and Consumer Services with their ongoing investigation,” the amusement park said.

A representative for Keator Construction said the company had no comment. Funtime Handels GMBH and Gerstlauer Amusement Rides have yet to respond to ABC News’ requests for comment.