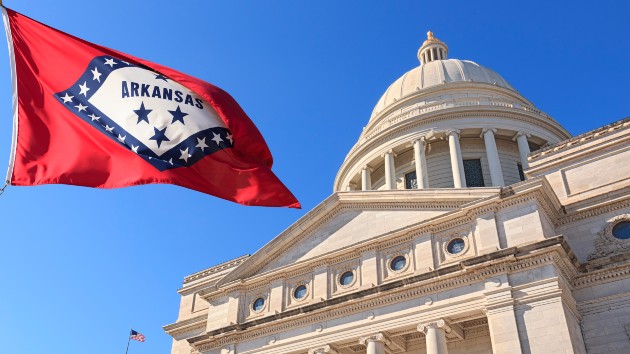 (NEW YORK) — Dozens of bills that LGBTQ advocates say would impact transgender rights are being considered in states across the country this year. Arkansas is among several to pass such measures so far, with two bills signed by Gov. Asa Hutchinson within the past week and a third — known as the Save Adolescents from Experimentation (SAFE) Act — currently sitting on his desk.

With the SAFE Act, Arkansas became the first state to pass a bill that would bar doctors from providing gender-affirming health care to transgender minors, including hormones, puberty blockers and transition-related surgeries.

Sponsors say these types of bills are meant to protect minors, who they say are too young to make decisions on transition-related medical care, while LGBTQ rights groups say the legislation is unnecessary and detrimental for trans youth.

For weeks, Joanna Brandt has felt like she has an “elephant sitting on my chest.” The River Valley resident has a 15-year-old transgender son, Dylan, who is currently undergoing hormone therapy. If the SAFE Act was enacted, he would have to pause his therapy until he is 18.

“It is incredibly stressful to not know what’s going to happen,” Brandt told ABC News.

Dylan started his treatment after several months of therapy and with the guidance of a medical professional with expertise in the area, according to Brandt, who noted, “We’re not experimenting with these kids.” Over the course of his treatment, Dylan has “blossomed” into a happy, confident and outgoing child, she said.

“Trans girls are girls and trans boys are boys, and denying them access to gender-affirming health care is denying them the right to be themselves,” Brandt said. “Decisions about these children’s health care should absolutely 100% be up to medical professionals and their parents and them, and certainly not in the hands of lawmakers that aren’t experts on the subject.”

Chris Attig, a lawyer based in Little Rock who is the father of a transgender college student, says a provision of the bill in which an insurer can choose not to cover the costs of gender transition procedures at any age is also worrisome.

“We don’t know if we’re going to be able to keep our health insurance policy,” Attig, who testified before the House and Senate against the bill this month before it passed on Monday, told ABC News. “I don’t know what’s gonna happen. As a business owner, it’s a problem.”

Brandt and Attig are joined by other parents and trans advocates in calling on the governor to veto the bill. The American Civil Liberties Union has said it would otherwise sue. At a press briefing Tuesday, Hutchinson said he planned to meet with and listen to people before deciding on signing.

The passage of the SAFE Act comes days after Hutchinson signed two laws that the ACLU of Arkansas charged would enable discrimination based on gender identity. One bans transgender girls from competing on school sports teams consistent with their gender identity; the other allows medical doctors to refuse nonemergency medical treatment to a patient based on religious or moral objections.

The governor defended signing those laws, saying Tuesday that the sports bill “made sense to me.”

“It just simply says that if you’re a biological male, you cannot compete against girls in sports,” he said. “I think that should not be a signal to anyone that they’re going to be oppressed in life.”

Hutchinson said he doesn’t expect the medical right-of-conscience act to be exercised very often, and that transgender people will be able to have the health care that they need.

“It’s very important that it does not allow anyone to discriminate based upon a class of persons,” he said. “That would be against federal law.”

LGBTQ advocates in Arkansas say the volume of legislation impacting transgender people this year has been damaging.

“There’s a lot of frustration, a lot of pain,” Rumba Yambú, director of Intransitive, which supports trans people in Arkansas, told ABC News.

Intransitive has been working to bring people to testify before the state legislature against the bills.

“It’s important for our community to be able to be the ones whose voices are heard during those hearings, and for them to feel supported,” Yambú said.

Other Arkansas state legislation currently under consideration that Intransitive is speaking out against includes a House bill that would require public school employees to address students by the name and sex designated on their birth certificate.

While she waits to see what becomes of the SAFE Act, Brandt said she and her family are weighing their options.

“I own a home and a business, friends, family here, but how can I stay somewhere that clearly doesn’t want us?” she said. “Dylan would be devastated if all the progress that he has made came to a screeching halt.”

Attig said it feels like the state is targeting his child.

Brandt said her community has been largely supportive, and she has heard from people that they don’t agree with the SAFE Act.

“I know that that is not how everybody here feels, even though right this second it feels like it,” she said.

Attig had one message in particular he wanted to share.

“Trans people belong in Arkansas,” he said. “We love them, they are loved and we want them here.”