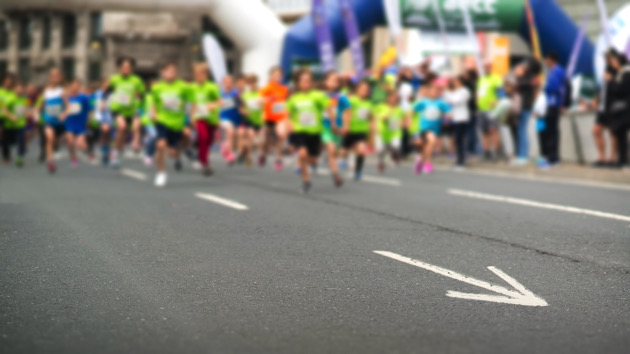 (CINCINNATI) — Crossing the finish line at a marathon is often a time to celebrate, but one running family is facing criticism after their 6-year-old was allowed to enter and complete the Flying Pig Marathon in Cincinnati last weekend.

Rainier Crawford, 6, ran the 26.2-mile course with his five siblings and parents, finishing in 8 hours and 35 minutes.

“Some of the training was like, hard, but I falled sometimes but sometimes, when I did one, it was like, normal,” Rainier told Good Morning America.

Crawford’s father, Ben Crawford, wrote on Instagram that his youngest son did struggle physically during the marathon.

“He was struggling physically and wanted to take a break and sit every three minutes,” Crawford wrote in an Instagram post Tuesday. “After 7 hours, we finally got to mile 20 and only to find an abandoned table and empty boxes. He was crying and we were moving slow so I told him I’d buy him two sleeves [of potato chips] if he kept moving.”

Crawford added that he was impressed by his son’s abilities.

“I didn’t know if he was going to be able to do it so to be able to run alongside of him and to watch his little body, it’s pretty mind-blowing,” he told GMA.

The social media post has since sparked an outcry, with some saying the family did it for likes on Instagram and some going so far as to accuse the Crawfords of child abuse.

Kara Goucher, a two-time Olympian and long-distance runner, was among those speaking out, writing on Twitter Wednesday, “I don’t know who needs to hear this but a six year old cannot fathom what a marathon will do to them physically. A six year old does not understand what embracing misery is. A six year who is ‘struggling physically’ does not realize they have the right to stop and should.”

Organizers of the Flying Pig Marathon defended their decision to let every member of the Crawford family participate in the 2022 marathon.

“The intent was to try to offer protection and support if they were on our course (Medical, Fluid and Replenishment),” Iris Simpson Bush, the president and CEO of the marathon’s parent organization Pig Works, wrote in an open letter posted to the organization’s website.

The nonprofit also told GMA they knew the Crawfords would run the Flying Pig race despite the marathon’s age limitation, which usually only lets runners 18 and older participate, a factor that played into the decision to let the Crawfords run.

“Our requirement of 18+ for participation in the marathon will be strictly observed moving forward,” Bush added in the open letter.

Experts say a child’s growth plates, the tissue near long bones, isn’t fully developed at age 6 and an extreme activity like running a marathon could be dangerous for children.

Dr. Alok Patel told GMA that he would be concerned with letting a young child run a marathon.

“If a young child were to run a marathon, I’m worried about electrolyte abnormalities, nausea, vomiting, heatstroke, all these signs and symptoms that may not be that clear in a young child,” Patel said.

The Crawfords said they don’t pressure their children to do intense activities like run a marathon but follow their kids’ lead if they say they want to try it out.

“We really care about our kids’ emotional and physical health. But we also care about their agency and if they want to do something, and we, you know, assess the risks and figure out if it’s OK,” Kami Crawford, Rainier’s mom, said.