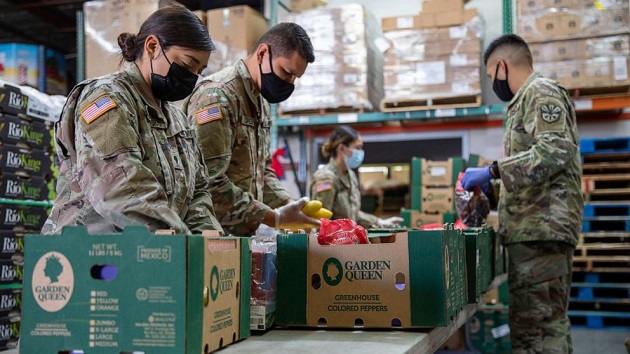 (NEW YORK) — Between the flags and parades, Americans are used to showing their patriotism on Memorial Day, but experts say this holiday many of the nation’s troops need more than a salute — ​they need food.

Food insecurity has skyrocketed for many Americans throughout the pandemic, and military families have not been immune. In fact, advocates say hunger and financial anxieties are issues that have been faced by military families for years.

The Armed Services YMCA, which exclusively serves active-duty military families, operates 12 food assistance programs on or near bases across the country, four of which opened during the pandemic.

“A lot of people came to the pantry, got what they needed, and then maybe they came back one more time, but then they were gone. With COVID, we’re seeing the same people week after week, month after month,” Dorene Ocamb, chief development and marketing officer for ASYMCA, told ABC News.

The ASYMCA in San Diego was providing food to 400 active-duty military families a month on average, but during the pandemic that number jumped to 400 a week, according to Ocamb.

According to Blue Star Families, 29% of junior enlisted family respondents talked about food insecurity in an annual survey last year.

An official with the Department of Defense told ABC News the Pentagon was working to track the problem and would be adding a question about food insecurity on a survey it plans to send to active-duty spouses this summer.

“Currently, the Department has established a group of key stakeholders within the Office of the Secretary of Defense and the military departments to holistically examine the issue of food insecurity, discuss the factors involved and identify resources to help resolve this challenge. In addition, the Department is exploring the potential impacts on both the readiness of the force and the wellness of our service members and families,” the official said.

“If the family that’s behind them is worried for whatever reason, then that service member is worried, and they’re not at their full attention, even on the task at hand, which is in this case, dangerous,” Ocamb added. “At the core, military is about service. So, they’re bred to think about serving others. It’s really hard to show up somewhere and say I’m the one who needs to be served.”

Experts say the problem is multi-faceted: low basic pay for newly enlisted men and women, housing allowances that have not kept up with housing prices and military spouses facing challenges finding a second income.

Blue Star Families estimates that 42% of military spouses who were working before the pandemic lost their jobs. Basic pay for new, junior enlisted men and women is about $21,000 to $24,000 a year, plus a possible housing allowance that can vary with duty station and dependents.

“What we see now is people who have looked at the military as a second career or as a long-term career and they are enlisting at a time when they already have families… you see lower ranking enlisted personnel with multiple dependents,” Abby Leibman, president and CEO at MAZON: A Jewish Response to Hunger, told ABC News. “Military families also need two incomes in order to have a good, stable financial family circumstance. And military spouses often face unemployment challenges that other communities do not because of the rates at which families are relocated.”

Erika Tebbens testified on Capitol Hill in 2016 about the difficulties she faced finding work as a young mom when her husband was a nuclear mechanic on a Naval aircraft carrier stationed in Washington State.

“I had been a high school teacher for a time. I couldn’t take teaching with me when we moved up to Washington State because I wasn’t certified to teach there,” she told ABC News via zoom this week. “We also had no family in the area. So we … didn’t have any affordable child care options… so we’re very fortunate that both of our families were able to help us a little bit and cover some groceries and a few small emergency expenses that popped up.”

Tebbens said her family’s budget was so tight they applied for SNAP, the federal food assistance program, but were told their housing allowance bumped them above the threshold to qualify. She said they ended up racking up credit card debt to get by and that the situation was “embarrassing.”

“I just didn’t want anyone to know that that was our reality,” she said.

House Rules Committee Chair Jim McGovern, D-Mass., has launched a series on hunger in the United States and held a roundtable discussion on hunger in the military on Thursday. He defended SNAP as a helpful option for military families, though over the years there has been discussion about the optics of men and women in uniform relying on a government food program.

“People who have put their lives on the line for this country should not be hungry,” he said. “And, you know, and if people have a problem with that, well, they’re awful people.”

Attorney for Trump, arguing for dismissal of NYAG lawsuit, tells judge: ‘You have a clear bias against my client’

‘Our environment shapes us’: Ojibwe architect Sam Olbekson designs from an Indigenous perspective

Idaho college murders: Investigators combing through hundreds of tips a week after murders