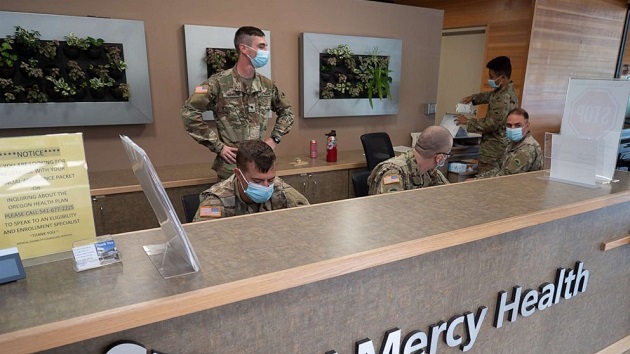 (SALEM, Ore.) — Hundreds of National Guard members are on the ground in Oregon to help with a COVID-19 surge that’s overwhelming hospitals across the state.

Oregon has 1,000 COVID-19 patients in hospitals, according to state data, the highest ever in the pandemic. Gov. Kate Brown called the news a “terrifying milestone.”

The state seen cases skyrocket over the past six weeks, with nearly 3,000 reported Tuesday, according to the Oregon Health Authority’s COVID-19 dashboard. The state has 45 available adult ICU beds out of 667, roughly 7%, as of Tuesday.

The state also has requested doctors, nurses, paramedics and respiratory therapists from out of state. At least 24 FEMA-deployed emergency medical technicians also have been sent out to assist at six Oregon hospitals, Brown said earlier this week.

Three Asante network hospitals in Jackson and Josephine counties in southern Oregon are reeling from a critical surge in COVID-19 cases. In those two counties, just four of 56 staffed adult ICU beds were available, according to the latest Oregon Health Authority data.

The Asante hospital network told ABC News that 80 National Guard members arrived on Aug. 19 and have been assigned to nonclinical support functions, including manning the COVID-19 hotline and assisting with drive-thru testing.

The hospital network reported 181 COVID-19 inpatients on Wednesday, a new record, and at least 9 in 10 hadn’t been vaccinated.

“All three of our hospitals are over capacity. Our ICUs are full. We’re putting two patients in ICU rooms at our Grants Pass hospital. These rooms are built to only house one patient,” Asante spokesperson Lauren Van Sickle told ABC News.

The hospital said capacity has not gone below 90% in the past six months and more than 400 surgeries have been canceled to deal with the surge, Van Sickle said.

Our hospital is actually in a really dire state right now,” Jackie DeSilva, the emergency preparedness manager with Asante, told ABC Portland, Oregon, affiliate KATU. “We are overflowing with patients.”

“We are actually extending our ICU beds into non-conventional areas that would not normally be considered ICU units so we can care for the patients,” she added.

State health officer Dr. Dean Sidelinger said in a statement Tuesday that current hospitalizations “far exceed” pre-vaccination surges last fall and winter, and a majority of those in hospitals aren’t vaccinated. So far 71.4% of those 18 and older are fully vaccinated in Oregon, according to state data.

“This is putting an unprecedented strain on our local hospitals. Already, we have seen some hospitals suspend much-needed medical procedures because of the overflowing capacity. This affects every Oregonian family and it is not sustainable,” he said.

Brown has been buckling down on public safety measures to cope with the surge in cases announcing a mask mandate for public outdoor settings on Tuesday, regardless of vaccination status, starting Friday. She also announced last week that health care workers and K-12 educators, staff and volunteers must be fully vaccinated.