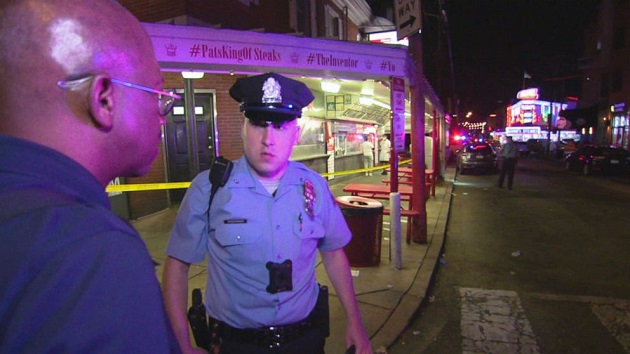 (SALT LAKE CITY) — Thousands of fans gathered in Wisconsin to celebrate the Milwaukee Bucks’ NBA championship, but scenes of celebration soon turned into chaos when gunfire rang out.

Two shootings broke out early Wednesday in downtown Milwaukee that wounded three, sent people running for their lives and left the community shell-shocked.

The shootings are only a snapshot of the skyrocketing gun violence that has swept the nation in recent months. Between Saturday, July 17, and Friday, July 23, the Gun Violence Archive tracked at least 915 shooting incidents — or, a shooting every 12 minutes — that left at least 430 people dead and 1,007 wounded. In total, more than 1,000 were wounded or killed this week alone. These numbers are not static, and are constantly updated as data comes in.

Last year marked the deadliest year for shooting-related incidents in the U.S. in at least two decades, according to Gun Violence Archive data with more than 43,000 gun deaths. But GVA’s data suggests 2021 is on track to surpass those figures with more than 24,000 gun fatalities reported so far.

ABC News partnered with its owned stations and affiliates across the nation to track the devastation. The findings reveal that gun violence, for many Americans, isn’t far removed from everyday life.

Gun violence in all its forms

As attention turned toward the shooting outside the Nationals game last Saturday, across the country in a dark church parking lot in Utah, 13-year-old Lance Moorehead was shot in the head around 1:40 a.m.

Lt. Richard Bell of the West Jordan Police Department called the shooting “a truly unfortunate, tragic accident” during a press conference. He said that Moorehead and his 15-year-old friend had snuck out and that one had brought a gun.

The two were “not being safe” with the gun which resulted in the 15-year-old unintentionally shooting and killing his 13-year-old friend, Bell said. He added that there was some criminal culpability and the 15-year-old was booked into a juvenile detention center on suspicion of manslaughter.

According to the 911 dispatch call, the teens did not know the gun was loaded.

“We’ve got a 13- and a 15-year-old. They’re inside a vehicle. Did not know the gun was loaded. The juvenile’s been shot in the head,” a 911 dispatcher told officers in a recording of the call.

Derek Thatcher, the heartbroken father of Moorehead, said in a statement to local station KSL-TV that his son “loved to skate, play football and video games. He had a contagious smile that could warm anyone’s heart. You couldn’t help but smile back.”

“Gun safety is of the utmost importance to prevent this kind of tragedy and heartache our family has experienced. We can’t stress enough how important gun safety is,” Thatcher said in his statement.

The tragedy shows that even children aren’t spared from this spike in gun violence.

In west Philadelphia last Saturday, a white Jeep pulled up to a store and an unknown number of occupants began to shoot indiscriminately into the store, striking two people, including a year-old child who was there with their mother, according to Joel Dales, deputy commissioner of the Philadelphia Police Department. He said a man inside subsequently returned fire.

Police said one person had been arrested in connection to that shooting, Philadelphia ABC station WPVI reported.

“They don’t care who’s around when they use these guns. It’s a big problem. This is not OK. … I’m tired of this. I’m sick and tired of this,” Dales said during a press conference.

In San Antonio early Tuesday morning, 15-year-old Tristan Jaden Rosas was playing video games in his bedroom with his younger cousin when a stray bullet entered the room and hit him in the head.

“Dudes were fighting in the back. They were shooting at each other and they brought it up here to the front,” Ray Rosas, the victim’s uncle, told San Antonio ABC affiliate KSAT.

Rosas told ABC News that after the bullet struck his nephew, his cousin tried to keep him alive.

“I should have been there, because when you tell your kid you’re going to protect him, that’s a promise you can’t ever take back,” Epi Rosas, Tristan’s father said.

San Antonio police told ABC News no one has been arrested in the case.

Some of those incidents have been mass shootings, defined as involving four people or more who were injured or killed — not including the suspect. So far, there have been 18 mass shootings in 12 cities across the U.S. this week, according to the GVA’s data, with 19 dead and 74 wounded.

The epidemic of gun violence also includes suicides, which are the cause of about 60% of adult firearm deaths, according to the Department of Justice. In 2019, an average of 66 people each day died by suicide with a gun, according to the Education Fund to Stop Gun Violence. This year alone there have been more than 13,500 suicides by gun, GVA data shows.

There are also gun violence incidents that erupt from alleged domestic disputes.

In Wichita, Kansas, on Monday, Kamden Campos, 21, allegedly kidnapped his girlfriend and her two children and brought them to a nearby lake. The woman jumped into the car and sped away as he fired shots towards the vehicle, wounding her 2-year-old daughter, the Reno County Sheriff’s Office said.

After a manhunt, Campos was booked into jail on attempted murder in the first degree, aggravated kidnapping and possession of stolen property charges, the sheriff’s office announced on Facebook. Officials said the child underwent surgery and is in stable but critical condition.

Officer-involved shootings also play a role in the violence, which includes instances where cops are the victim as well as the perpetrator.

In Clark County, Washington, a sheriff’s deputy was shot and killed Friday night and police are looking for suspects who may be armed and dangerous.

“This is a difficult time for the Clark County Sheriff’s Office, law enforcement agencies in Clark County and the surrounding Clark County, Portland metro area,” the sheriff’s office said in a press conference after the shooting.

The assessment found that practically every state in the nation had been affected over the last week, with at least one gun-related incident in 47 states and the District of Columbia.

Of all the states, Illinois had the highest number of gun violence incidents, with 109 incidents tracked. Texas followed with 63 incidents, and then Pennsylvania, California and New York, where there were 59, 52 and 48 incidents, respectively, over the last week.

When it came to gun-related incidents that led to death, Texas had the highest rates with 35 fatalities. Illinois, meanwhile, topped the list for most people wounded from firearms at 124.

Over the last week, the worst day for gun violence was July 18 and the most violent time on any given day was between midnight and 3 a.m. — a time period when about 22% of all incidents occurred.

“This week is indicative of a big longer-term systemic issue where people are becoming afraid to go out to parks and afraid to go to malls because they know when they go to a baseball game, there is going to be a drive by [shooting],” Mark Bryant, the executive director of GVA, said. “It’s been a very average week and we should be horrified.”

While no part of the country is immune to gun violence, as ABC News dug into the data, it found that the violence occurs disproportionately in poorer, urban areas — from Los Angeles to Chicago to New York City.

More than two-thirds of all the gun violence incidents reviewed unfolded in census tracts across the nation, where more than 50% of residents are nonwhite.

Over half of the incidents occurred in the nation’s poorest census tracts, where the median household income is $40,000 a year or less. About 17% of shootings occurred in census tracts where people make more than $60,000.

In New York City, NYPD Commissioner Dermot Shea told ABC News that the city saw a 73% increase in shootings in May 2021 when compared to the same time last year. When asked if people are brazen with carrying weapons, he said, “I don’t think there’s any doubt. … The data here in New York City is [there are] more guns on the scene of shootings, more rounds being fired.”

He said that factors contributing to the surge in gun violence include gang violence, police budget cuts and COVID-19 shutdowns in the court system, which have caused a backlog of more 5,000 gun cases.

Shea said there had been a drop in the rate of gun-related cases in June 2021 after the department increased gun-related arrests and police targeted repeat offenders, but he says the drop still isn’t enough.

“When you look at who’s getting shot in this city right now, it’s about 97% of people of color,” he said. “It’s way off the charts.”

ABC News spent time at the Oakland, California, headquarters of ShotSpotter, a company that works with law enforcement across the country to record and track gunshots in the area and alert authorities.

In Philadelphia on Wednesday, where the gun-related death toll has already surpassed 300 this year, three teens were shot — two of them died from their wounds. As ABC News embedded with Philadelphia police, they repeatedly pointed out streets where shootings had once occurred.

Later that night, a person was shot dead in front of what some might consider Philadelphia’s most famous cheesesteak restaurants, Pat’s and Geno’s. Philadelphia Police Commissioner Danielle Outlaw told ABC News the shooting was due to a parking dispute.

During a time in which policing has received extra scrutiny after the death of George Floyd, Outlaw, a Black woman, sees the struggle from both sides.

“Because I have all of these lived experiences and these different perspectives, I understand why the police do what we do,” she said. “But I also understand the hurt and torment in our communities.”

Like so many other communities across the nation, in Suitland, Maryland, just outside of Washington, D.C., one community is mourning the death of Taya Ashton. The 20-year-old transgender woman was killed last Saturday night in her apartment.

DeAllen Price, 27, has been charged with first- and second-degree murder in connection to Ashton’s killing. He was arrested a day after her death on unrelated charges in Virginia and is pending extradition to Prince George’s County, authorities said. Police say the suspect and victim knew each other.

Prince George’s County Police said they don’t believe it was a random crime, but also said that they have “uncovered no evidence suggesting Taya’s murder was due to her gender identity.”

Taya’s grandfather, Stuart Anderson, held a vigil in her honor on Wednesday where around 100 friends and family members hugged one another, sang and released purple balloons in her honor.

Anderson denounced the gun violence that has wracked the community.

“I’m tired of doing vigils,” Anderson told ABC News. “If whoever it is that shot my grandchild hadn’t had the gun, my grandchild would be right here. We got to get these guns off the streets.”

If you are struggling with thoughts of suicide or worried about a friend or loved one, help is available. Call the National Suicide Prevention Lifeline at 1-800-273-8255 (TALK) for free, confidential emotional support 24 hours a day, seven days a week. You can also reach the Trevor Project at 1-866-488-7386 or the Crisis Text Line by texting “START” to 741741.