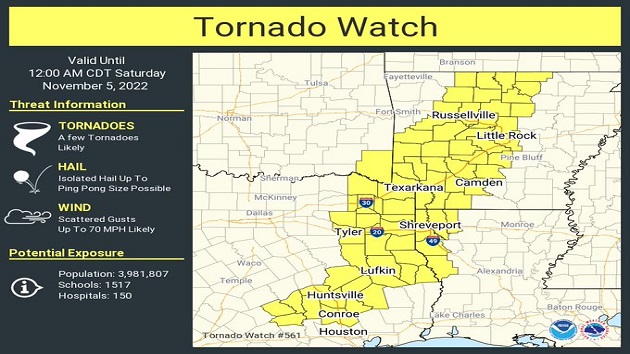 (MCCURTAIN COUNTY, Okla.) — One person died in McCurtain County, Oklahoma, and several others were injured after tornadoes impacted the state Friday, an official confirmed to ABC News.

Oklahoma Gov. Kevin Stitt said he was “praying for Oklahomans impacted by today’s tornadoes,” in a tweet Friday night.

He added that search and rescue teams and generators were being sent to the area.

Storms hit in Bryan, Choctaw, and Le Flore counties, among others. Additional flash flooding in some areas.

Search & rescue teams and generators forwarded to the Idabel area.

Will continue to work diligently with @okem.

A tornado watch had been issued across Arkansas, Louisiana, Oklahoma and Texas through Friday night.

A tornado watch has been issued for parts of Arkansas, Louisiana, Oklahoma and Texas until 12 AM CDT pic.twitter.com/fhHfl5H4GO

In the Dallas/Fort Worth region, multiple tornado warnings had been in effect on Friday, with people advised to seek shelter immediately due to life-threatening conditions.

“Atmospheric conditions are favorable for severe storms,” the National Weather Service for Fort Worth, said.

At least 10 people were injured after a confirmed tornado swept through Lamar County, Texas, the sheriff’s office said. They were being treated at a local hospital. Two people were in critical condition as of Friday night.

“If you do not live in the storm affected areas of Lamar County, please stay away. If you don’t have to leave home, please stay home,” the Lamar County Sheriff’s Office advised residents on social media Friday night.

A tornado was also observed near Sulphur Springs in Hopkins County, Texas.

The Hopkins County Sheriff’s Office said four homes were damaged following reports of a tornado in the southwestern region of the county. No injuries have been reported at this time.