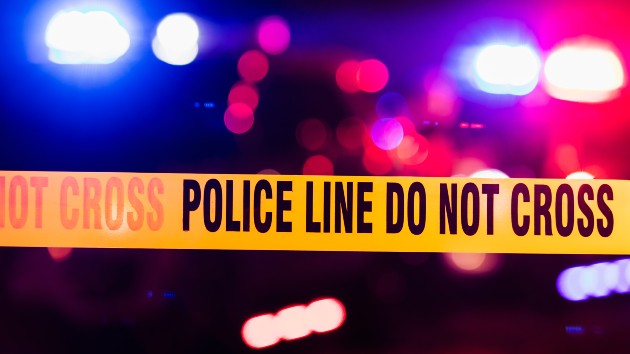 (RICHMOND, Va.) — Six people were shot, at least one fatally, outside an apartment complex in Virginia’s capital on Tuesday evening, police said.

The Richmond Police Department said its officers were dispatched to the scene just after 6:30 p.m. ET where they discovered two women, two teenagers and a child suffering from gunshot wounds. The unknown suspect had fled the scene and remains at large, according to police.

Richmond Police Chief Gerald Smith described the scene where shots were fired as a quad surrounded by multiple apartment buildings, across the street from a high school, in the city’s Southside area. Investigators believe the shooter was targeting an apartment unit rather than a person.

“It’s just a heinous act that baffles the mind as to why anyone would do this in a quad full of children just out enjoying themselves,” Smith said during a press conference Tuesday night. “They had no regard for the individuals that were out there.”

Smith told reporters that one of the victims was a 3-month-old baby who was hospitalized in “serious condition.” A press release issued later by his department didn’t specify the age of the wounded child.

Richmond Mayor Levar Stoney described the victims as “innocent bystanders” who were shot “in a single, senseless act of gun violence.”

“This is a tragedy that no community should have to experience,” Stoney said in a statement Tuesday night. “My heart aches for our families.”

Anyone with information on the deadly shooting is urged to call Detective Gregory Russell with the Richmond Police Department’s Major Crimes Unit at 804-646-7715 or to contact the Metro Richmond Crime Stoppers at 804-780-1000.