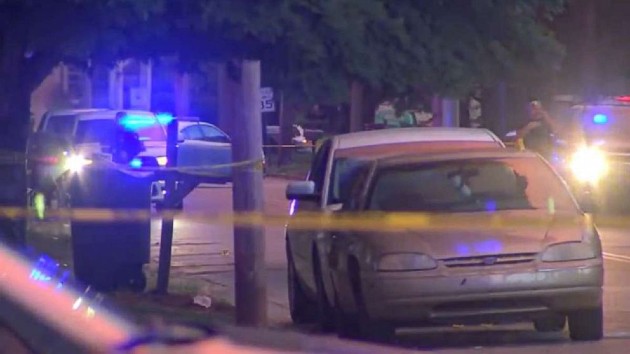 (RALEIGH, N.C.) — One child is dead and two others have been shot in two separate drive-by shootings that took place just blocks from each other.

The first incident occurred at approximately 7 p.m. Monday in Statesville, North Carolina — about 40 miles north of Charlotte — when a 9-year-old girl and 7-year-old boy were found shot outside of a home on Wilson Lee Boulevard, according to ABC News’ Raleigh station WTVD-TV.

People who witnessed the shooting said a white vehicle — possibly a Mercedes — was traveling southbound when it looked like somebody fired shots from within the car and the bullets ended up striking the two children, according to WTVD.

Anthony Jonathan Caldwell was getting ready to have a barbecue with his family when he heard the shots ring out through the neighborhood.

“I’m ex-military so I know what high caliber rounds sound like,” Caldwell told WTVD. “And when I came around the corner I heard a bunch of adults screaming and crying ‘the kids! The kids! The kids!’”

Both of the children were immediately taken to the hospital where the 9-year-old girl died from injuries sustained in the shooting and the 7-year-old boy is still being treated. It is unknown how many times each of them were shot and the boy’s condition has not yet been disclosed.

It was just 90 about minutes after the first incident while the Statesville Police Department was in the middle of processing the first shooting that another drive-by shooting occurred, this time involving a 10-year-old boy, just a couple of blocks east on New Bern Avenue.

“[He] suffered a non-life-threatening gunshot wound,” said the Statesville Police Department in a statement. “Witnesses stated a white possible Honda Accord drove by with a subject shooting from inside the vehicle.”

Authorities say that none of the children who were hit were the intended targets.

“So many of us turn and look the other way but these are our kids — these are babies,” Caldwell told ABC News’ Charlotte affiliate WSOC-TV. “I have grandkids. They could easily be one of mine or one of yours. We need to come together as a community. Whatever the disagreement is, their first mean of attack is their firearms. They are taking out innocent life. It’s got to stop.”

Detectives are now trying to figure out if the same shooter was responsible in both of the shootings or if they were completely separate incidents, according to WSOC. No arrests have been made at this time and the investigation is ongoing.