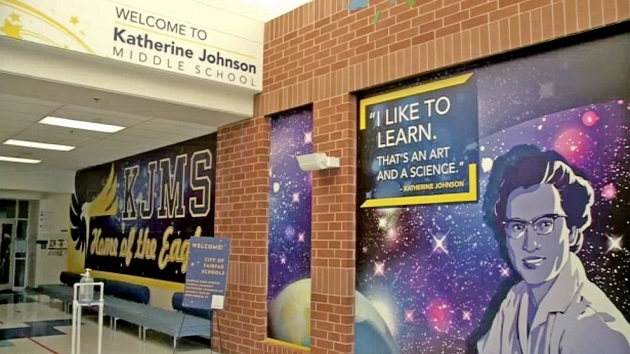 (FAIRFAX, Va.) — A Virginia middle school that was once named after a Confederate soldier has been renamed in honor of African American NASA mathematician Katherine Johnson.

Lanier was a prominent American poet and private in the Confederate army. Johnson is a modern-day space legend with a legacy of being one of four Black women whose work with NASA helped pave the way for the first American astronaut to successfully orbit Earth.

The City of Fairfax’s school board voted unanimously to change the school’s name in November 2020 after months of public debate and hearings.

“Her contributions continued to serve the nation and helped ensure that the ‘Eagle had landed…and landed safely,"” city school board member Jon Buttram, said at the time in a press release. “So, I think it appropriate that the name Katherine Johnson for our middle school will inspire new generations of ‘Eagles’ for our community, and I look forward to watching them fly.”

The move to rename the school came at a time when several Confederate statues were toppled and institutions bearing Confederate names were heavily criticized amid national protests denouncing racism. Civil rights activists have said Confederate titles and monuments pay homage to America’s history of slavery and racism.

Johnson’s remaining family members attended the renaming ceremony. The mathematician died February 2020 at the age of 101.

“We’re elated that they’ve chosen her names out of so many other names,” said Valerie Johnson, Katherine’s niece and a Fairfax County Public Schools math resource specialist. “She had very humble beginnings, she wasn’t a prideful person, and she never really let people know about all her accomplishments. Even as a child, I did not really understand the magnitude of her work, but as I became an adult I learned about her great and important work at NASA and the fact that she really had superpowers, they were passion, perseverance, and courage,” Johnson said of her aunt to local Virginia ABC affiliate WJLA.

“Our school had been named in the 1960s when Fairfax County named all middle schools after literary figures,” Hanna said. “After six months of community engagement and receiving over 300 names suggestions, we thought it was important to find a name that reflected the values and beliefs of our diverse school and community.  We found great enthusiasm in selecting Katherine Johnson to be our new namesake.”

“As our City of Fairfax Superintendent Dr. Phyllis Pajardo reminded us at the ceremony, ‘Names matter, names inspire, and names show students that they are valued,” Hanna added.

Johnson was hired by NASA in 1953 and calculated the trajectory for Alan Shepard, the first American in space, before electronic computers were used.

When astronaut John Glenn was preparing for his mission that would make him the first American to orbit the Earth, he requested Johnson personally recheck the calculations made by the new electronic computers.

President Barack Obama presented Johnson with the Presidential Medal of Freedom in 2015.

In April, Fairfax County public schools became the first in the nation to rename a high school in honor of John R. Lewis, the late civil rights icon and congressman.