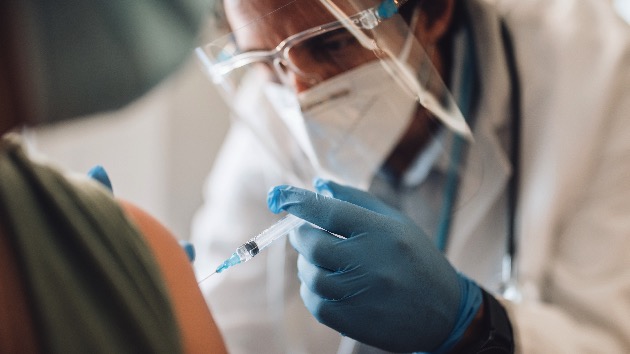 (NEW YORK) — As the COVID-19 pandemic has swept the globe, more than 5.2 million people have died from the disease worldwide, including over 793,000 Americans, according to real-time data compiled by Johns Hopkins University’s Center for Systems Science and Engineering.

Just 60.4% of the population in the United States is fully vaccinated against COVID-19, according to data from the Centers for Disease Control and Prevention.

Dec 10, 10:04 am
Masks or proof of vaccination required in all indoor public places in New York

Masks will now be required in all indoor public places in New York state unless the business or venue requires proof of full vaccination, Gov. Kathy Hochul said Friday.

The new measure takes effect Monday and lasts until at least Jan. 15 as the state tries to disrupt a winter surge.

New York’s seven-day average case rate has jumped by 43% since Thanksgiving, according to the governor’s office.

“We shouldn’t have reached the point where we are confronted with a winter surge, especially with the vaccine at our disposal, and I share many New Yorkers’ frustration that we are not past this pandemic yet,” Hochul said in a statement. “I want to thank the more than 80 percent of New Yorkers who have done the right thing to get fully vaccinated. If others will follow suit, these measures will no longer be necessary.”

At least 25 states have now reported cases of the omicron variant, just over a week after California identified the first case in the U.S.

Iowa, Michigan and Virginia became the latest states Thursday to confirm positive cases of the new variant of concern.

Centers for Disease Control and Prevention Director Rochelle Walensky told the Associated Press Wednesday that most of the cases have been mild, though there has been at least one hospitalization.

COVID-19-related hospital admissions in the U.S. are up by 47% in the last month, according to federal data. Nearly 80% of adult ICU beds are full.

The U.S. is now reporting more than 117,000 new cases each day. The daily case average has surged by nearly 83% since late October, according to federal data.

These kids are among the over 200 million Americans of all ages who are now fully vaccinated, according to the White House.

However, roughly two-thirds of parents of elementary school-aged children are either holding off on getting their younger kids vaccinated or refuse to do so, according to a poll released Thursday by the nonprofit Kaiser Family Foundation.

Parents of teens are more willing to get their kids vaccinated, but only about half of that age group have gotten the shot so far, KFF found.

The new findings come despite increasing evidence that the vaccine is safe and that kids and teens are now helping to drive up case numbers.