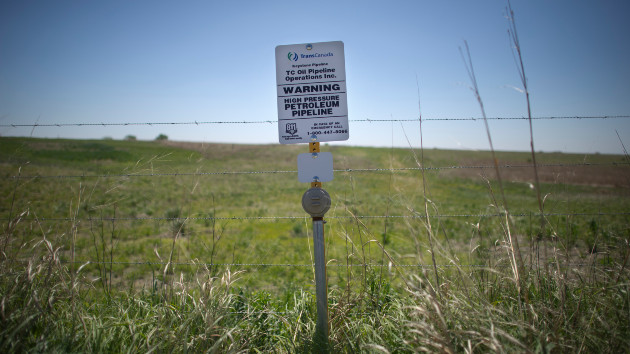 (NEW YORK) — The Keystone pipeline system was shut down by operator TC Energy after an oil spill released an estimated 14,000 barrels into a creek in Washington County, Kansas.

The system transfers oil between Canada and the U.S. Crews were able to control downstream migration of the oil as of Thursday night.

The emergency shutdown was issued early Thursday morning after a detected pressure drop in the system.

The affected segment was isolated and booms were deployed to control downstream migration of the spill, TC Energy said.

The Environmental Protection Agency dispatched two regional coordinators to the scene. TC Energy also mobilized a response crew originating from Steele City, Nebraska, to begin containment and source control, according to the the EPA. Washington County is about 20 miles south of Steele City, Nebraska.

According to the EPA, there are no known impacts to drinking water wells or the public but surface water of Mill Creek has been impacted.

The EPA said it will oversee TC Energy’s response operations to ensure proper cleanup and evaluate the cause of the incident.