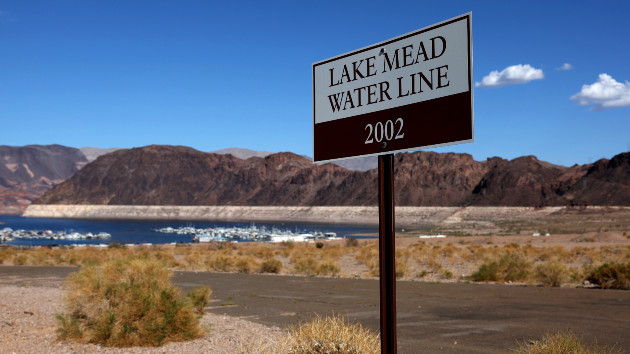 (NEW YORK) — Officials have identified a set of human remains that surfaced earlier this year in Lake Mead, as the reservoir deals with a historic drought.

The remains, found May 7 at Callville Bay, on the Nevada side of the lake, are one of several that have been uncovered in the lake since May 1, when human remains were found in a barrel.

The Clark County coroner identified the remains as Thomas Erndt, who is believed to have drowned over two decades ago.

County officials said the remains were identified through investigative information, DNA analysis and reports of the original incident.

Erndt, a 42-year-old from Las Vegas, reportedly drowned on Aug. 2, 2002, although officials said Wednesday that the official cause and manner of death are undetermined.

The Las Vegas Review Journal published a death notice on Aug. 8, 2002, that said Erndt jumped from a boat, was missing and presumed drowned, according to an article from the newspaper Wednesday.

The remains, described by officials as “skeletal,” were found by two sisters, Lindsey and Lynette Melvin, who said they were paddleboarding on the lake because the water was too shallow to go snorkeling.

The pair told Las Vegas ABC affiliate KTNV-TV that they found the remains when they stopped to explore a sand bar that they said had been underwater before the drought lowered water levels in the lake.

The Melvins said they initially thought the skeletal remains were from a big horn sheep. However, once they saw a human jawbone with teeth still attached, they reported it to the National Park Service.

“We just really hope that the family of that person finally gets answers and hope their soul is laid to rest peacefully,” Lynette Melvin told KTNV in May.

Authorities have uncovered human remains in Lake Mead five times since May. The first set, found in a barrel on May 1, had a gunshot wound and is being investigated as a homicide, officials said. The remains belonged to someone who died in the mid-1970s to early ‘80s based on his clothing and footwear, police said.

Following the discovery of Erndt’s remains on May 7, officials uncovered partial remains on July 25 near Swim Beach on the Nevada side of the lake’s west end, according to a statement from the National Park Service. A second set of partial remains was discovered in the same area on Aug. 7.

Officials are still working to determine if these remains are related.

The latest discovery of remains was on Aug. 15, found again at Swim Beach.