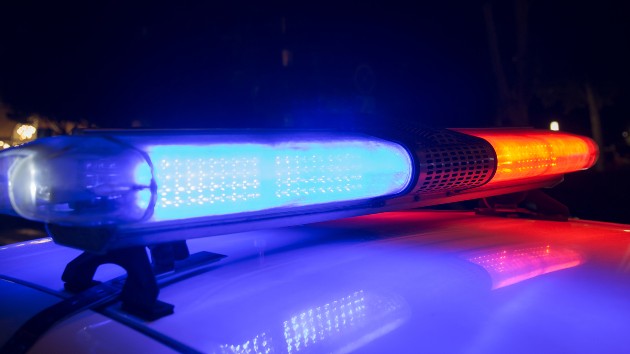 (PHILADELPHIA) — A Philadelphia police officer was arrested and charged with driving under the influence after authorities alleged he drove his car into a house Saturday night injuring two people inside and killing a dog.

The officer, identified by officials as 27-year-old Gregory Campbell, was off-duty when the episode unfolded around 8:20 p.m., according to a statement from the Philadelphia Police Department.

Campbell was driving in a residential neighborhood of South Philadelphia when he lost control of his 2014 Dodge Dart, went airborne and plowed into the front of the home, penetrating its facade, according to the statement.

A 53-year-old woman and her 45-year-old husband were both struck by the vehicle while inside their home. The woman was pinned under the car and had to be rescued by firefighters, police said.

The woman, whose name was not released, was unconscious when she was taken by ambulance to Jefferson Torresdale Hospital in Philadelphia, police said. She was listed in critical condition on Sunday, according to authorities.

The couple’s two dogs were struck by the car and one of the animals was killed, police said.

“The consequences of choosing to drive while under the influence are enormous, and all too often, life-changing,” Philadelphia Police Commissioner Danielle Outlaw said in a statement. “A family should always feel safe in their home, and yet the actions of this individual shattered that reality.”

Campbell sustained a laceration to his head in the crash, police said. He was also taken to Torresdale Hospital, where he was placed under arrest on suspicion of driving under the influence and aggravated assault, authorities said.

“The fact that the offender, in this case, is a Philadelphia Police Officer, is appalling,” Outlaw said. “Police officers must be held to a higher standard — even while off-duty — and I assure the victims and the public that a complete and thorough investigation will take place. My prayers remain with this family.”