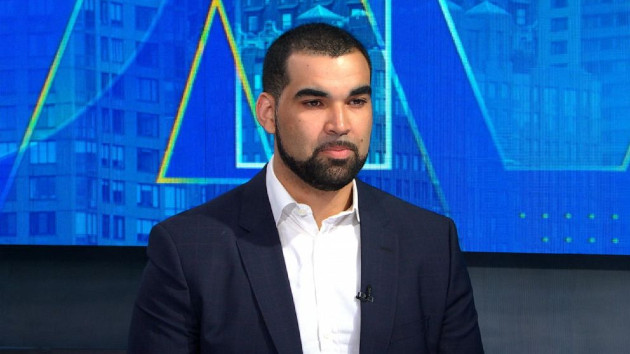 (NEW YORK) — Kenneth Foote-Smith was on the subway when a gunman detonated a smoke canister, sending commuters into panic.

He saw women screaming and “banging on the door,” and a man trying to open the subway car door, “fighting for his life.”

“That’s when I knew something was very, very wrong and that’s before the gunshots even happened,” Foote-Smith told ABC News’ Good Morning America.

Ten people were shot by a gunman on a Manhattan-bound N subway car during the Tuesday morning commute as the train approached the 36th Street subway station in Brooklyn’s Sunset Park neighborhood, according to the New York City Police Department.

The gunman — who remains at large — donned a gas mask and detonated a smoke canister before pulling out a .38-caliber handgun and opening fire, a police official told ABC News.

Foote-Smith said the first interruption to his commute was “a loud bang, sounded almost like glass breaking.”

“Everyone on my train got up and hurriedly moved toward the conductor’s door, and before I could turn to see what they were fleeing from, there were three loud bangs — and it was much closer and much different noise than that first bang,” he said.

Foote-Smith said he looked at the next subway car and saw a man “banging on our door, trying to open it up with all the ounce of power he can — and the door is not moving.”

That’s when smoke started filling up that neighboring car.

“Once my eyes adjusted to this really thick, white smoke filling up the car, I saw faces pressed against the glass of their subway connector door. And it was women’s faces and they were screaming, they were banging on the door,” he said. “And once we saw that gentleman banging on the door for — fighting for his life, that’s when we noticed — that’s when I knew something was very, very wrong and that’s before the gunshots even happened.”

The gunshots rang out as the train approached the 36th Street station, Foote-Smith said.

“It was three or four quick ‘pop, pop, pops,"” he said, “and everyone on my train immediately knew what it was.”

“No one screamed or said anything, we were just pleading with the conductor to please move this train,” he said. “He does eventually come out and sees the smoke — and the smoke at this point has now completely filled the car. I can’t see into the [neighboring] railway car anymore and people spilled out onto that small platform between the trains and the screams have now increased. “

“This is the moment when the gentleman in our train decides to try and open the subway connector door from our side — after we were frozen in fear for maybe the longest 30 seconds of our life –.and the door still jammed,” he said. “Now have to watch as people scream and struggle and try and fight for their lives for something we don’t know.”

There were more gunshots as the train pulled up to the station, he said.

“As soon as the subway doors opened, it’s a sea of people coming out of the subway,” he said. “I saw people with gunshot wounds and stumbling and pushing people over, coughing and choking on smoke.”

In the chaos, he said a conductor led passengers onto another train.

“My first thought when we got on that train, though, was, is the shooter still with us?” Foote-Smith said.

Police have named a suspect in the shooting — 62-year-old Frank R. James.

James is now considered a wanted fugitive. The U.S. Marshals have joined the search along with the NYPD, FBI, ATF and other agencies.