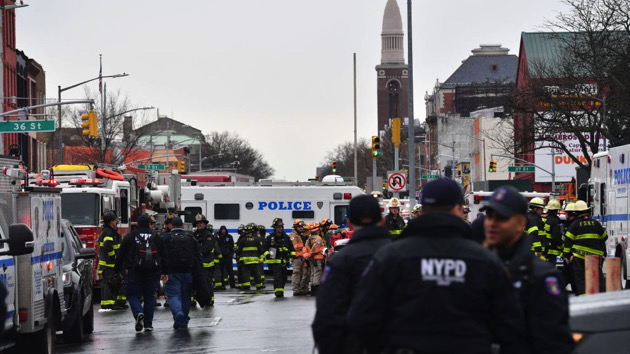 According to a police official, the suspect was seen mumbling to himself before he put on the gas mask, released a smoke canister commonly bought online and opened fire with a .380 caliber handgun.

There were no working cameras in the 36th Street station, according to a police official. But police were able to get an image of the suspect from a bystander’s cellphone video, a law enforcement official told ABC News.

In the subway station, police found a handgun with three extended round magazines: one on the shooter’s backpack, one empty on the floor and one in the gun jammed, the law enforcement official said. The gun jamming is believed to have saved lives, the official said.

“After the smoke went on there was a bunch of popping, which I thought at first was firecrackers,” he went on. “I ducked behind a chair to protect myself.”

Sewell said there are no known explosives on subways and a motive in still unknown.

The NYPD has put out a citywide alert for a U-Haul vehicle with license plate AL31408 that may be associated with the suspect, according to police sources.

Victims range in age from 17 to 50, according to a police official.