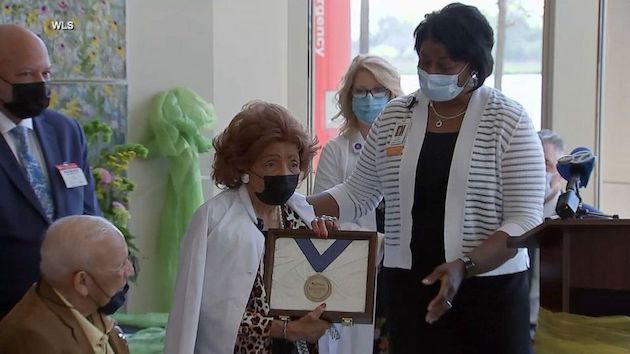 (ELGIN, Ill.) — Betty Brown was rejected by Advocate Sherman Hospital in Elgin, Illinois, for nursing school 71 years ago because she is Black. This year, the now-retired 90-year-old is being named an honorary chief nursing officer by that same hospital.

“It was very emotional,” Brown told ABC News. “And it was emotional for the speaker … because of somebody like me, it made her what she is today,” she said, referring to the hospital’s current president, Sheri De Shazo, who is a Black woman.

“That refusal to let that moment that I know was deeply painful — She didn’t let it become a barrier and that’s what inspires me,” De Shazo told ABC 7 Chicago.

She later returned to work at Advocate Sherman Hospital, but she never held a grudge against the institution.

She’s also a local leader, volunteering with organizations like the local Elgin YWCA, which she says gave her and other Black children a safe place to play and socialize.

She took swimming, tap dancing and music lessons there — and she says the organization sparked her passion for giving back to the community.

“While other organizations were still segregated, we have always welcomed everyone into our programs,” said Alana Freedman, an administrator at YWCA Elgin. “Over the years, almost her entire 90 years, she’s been a supporter of our programs and our mission. She’s come back to teach classes to our children here, like etiquette classes.”

The YWCA honors Brown annually, by presenting a social justice award in her honor to up-and-coming local heroes: the Betty Brown Racial Justice Award. It’s one of the many ways Brown has been honored over the years.

“I will always contribute to them,” Brown said.