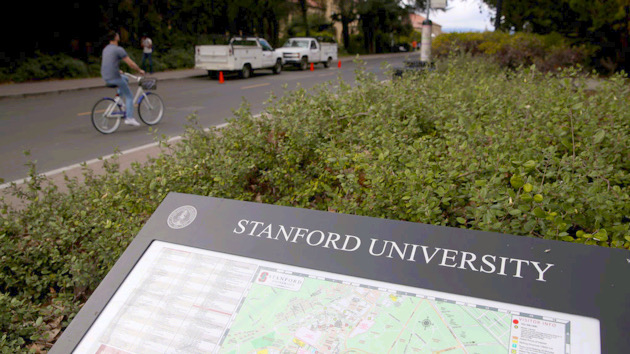 (PALO ALTO, Calif.) — A hate crimes investigation has been launched at Stanford University after a noose was found hanging in a tree outside a student residence hall, officials said.

It was the third time in four years that a noose has been discovered on the Palo Alto, California, campus, and the second since November, according to university officials.

“We cannot state strongly enough that a noose is a reprehensible symbol of anti-Black racism and violence that will not be tolerated on our campus. As a community, we must stand united against such conduct and those who perpetrate it,” Brubaker-Cole and Dunkley wrote in their statement to The Stanford Daily student newspaper.

The noose was discovered at about 7:45 p.m. Sunday hanging on a tree outside Branner Hall, an undergraduate residence hall, and was reported to the university’s Department of Public Safety, school officials said.

Campus police immediately launched a hate crimes investigation that included interviewing maintenance staff, students and school staff in an effort to narrow down the time frame for the incident and identify a suspect or suspects, according to a statement on the Stanford’s Protected Identity Harm Reporting website.

It was not immediately clear if any campus security video captured the culprit hanging the noose.

Brubaker-Cole and Dunkley thanked the people who saw the noose and reported it to the campus police.

“We are sharing this message with the full university community so that everyone is informed and we can move forward as one committed to ending anti-Black racism,” Brubaker-Cole and Dunkley said in their statement.

It was the second noose found on the campus in six months. On Nov. 29, a student reported seeing two long cords that appeared to be fashioned into a noose hanging from a tree along a campus walking trail. Campus police investigated the incident but could not determine if the cords were deliberately fashioned into a noose or were part of an abandoned swing or rope ladder, according to school officials.

In July 2019, campus police investigated the discovery of a noose near a residence for summer students.

No arrests have been made in any of the incidents.