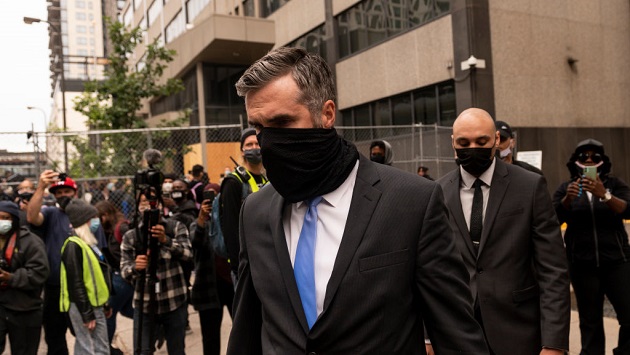 (ST. PAUL, Minn.) — A federal jury is poised to begin deliberating the fates of three former Minneapolis police officers accused of violating George Floyd’s civil rights by not providing medical aid during his fatal arrest and failing to stop their senior officer’s excessive use of force.

The U.S. District Court jury in St. Paul, Minnesota, is expected to get the case Wednesday morning and begin weighing the evidence against Thomas Lane, 38, J. Alexander Kueng, 28, and Tou Thao, 35.

The panel heard closing arguments on Tuesday from prosecutors and defense attorneys, but was sent home before being handed the case due to a snow emergency declared in St. Paul.

In her closing argument, U.S. Assistant Attorney Manda Sertich asked the jury to convict all three defendants, alleging they ignored their duty to intervene as they watched Derek Chauvin “commit a violent crime” by kneeling on the neck of a handcuffed Floyd for 9 minutes and 29 seconds, rendering him unconscious and without a detectable pulse.

“No one did a thing to help,” Sertich told the jury.

Chauvin was convicted in state court last year of second-degree unintentional murder, third-degree murder and second-degree manslaughter. He was sentenced to more than 22 years in prison. He later pleaded guilty to federal civil rights charges stemming from Floyd’s 2020 death and the physical abuse of a handcuffed 14-year-old boy in 2017.

“A human being, someone’s son, father, friend, significant other, George Perry Floyd Jr. died a slow and torturous death … underneath their knees, handcuffed, unarmed, not resisting in broad daylight on a public street,” Sertich said.

Sertich cited the inactions of all three men, starting with Thao, who testified during the trial that he never touched Floyd and was focused on “crowd control” during the Memorial Day 2020 episode. But Sertich said Thao refused to stop Chauvin’s brutality despite witnesses, including an off-duty firefighter, yelling at him to check on Floyd’s well-being.

She said Kueng and Lane, both rookie cops at the time of Floyd’s death, and Thao failed to follow “plain, old common sense.”

“Chauvin’s use of force was obvious and unreasonable to everyone, including bystanders which included juveniles,” Sertich said.

She added that Thao appeared more concerned with arguing and belittling “people trying to make him do what the law — not to mention human decency and common sense — required him to do.”

Turning her attention to Kueng, Sertich said that even as Floyd begged for his life and repeatedly complained he could not breathe, Kueng pressed the handcuffed man’s wrists into his back and laughed when Chauvin told Floyd that talking uses a lot of oxygen.

While Lane questioned Chauvin about whether they should put Floyd on his side to help ease his breathing and went with Floyd in the ambulance to assist paramedics, Sertich said he “did nothing to give George Floyd the medical aid he knew Mr. Floyd so desperately needed.”

All three defendants testified during the trial and each attempted to shift the blame to Chauvin, who was a 19-year veteran of the Minneapolis Police Department.

“I would trust a 19-year veteran to figure it out,” Thao testified. Lane told the jury that Chauvin “deflected” all his suggestions to help Floyd and Kueng testified that Chauvin “was my senior officer and I trusted his advice.”

Sertich told the jury that Chauvin barely spoke to Lane, Kueng and Thao during the incident and certainly wasn’t “ordering them around.”

‘A tragedy is not a crime’

Thao’s attorney, Robert Paule, acknowledged in his closing argument that Floyd’s death was a tragedy.

“However, tragedy is not a crime,” Paule said.

Paule argued that the actions of all three officers showed they did not willfully neglect to help Floyd. Paule said Thao was the officer who radioed for an ambulance to step up its dispatch to the scene and suggested using a hobble device to restrain Floyd.

He also said Thao believed that Floyd was suffering from excited delirium, a syndrome in which a subject displays wild agitation and violent behavior, and the best thing to do was hold him down until paramedics arrived.

“They didn’t do that for a bad purpose,” Paule said. “They did that to get medical people there quickly.”

He asked the jury to review videos of the incident presented at the trial, noting, “Three officers are not able to control a person in handcuffs.”

Kueng’s attorney, Thomas Plunkett, said his client’s inadequate training by the Minneapolis Police Department, lack of experience and his “perceived subordinate role to Mr. Chauvin” combined for a perfect storm that cost Floyd his life and disproves the government’s allegations that Kueng willfully deprived Floyd of medical aid and failed to stop Chauvin.

Plunkett said Kueng was “under the influence” of Chauvin, his training officer.

He added, “We often hear about the mob mentality. Courts are this country’s protection against the mob and courts depend vitally on you as jurors.”

Lane’s attorney, Earl Gray, wrapped up the closing arguments by accusing the government of indicting an “innocent man.”

“In other words, you can do an innocent act and you can end up in a courtroom like this because that’s what happened to Thomas Lane,” Gray told the jury.

Gray left the jury to ponder the question, “Why did the government indict them?”

“We all know why,” Gray said. “Politics, ladies and gentlemen.”