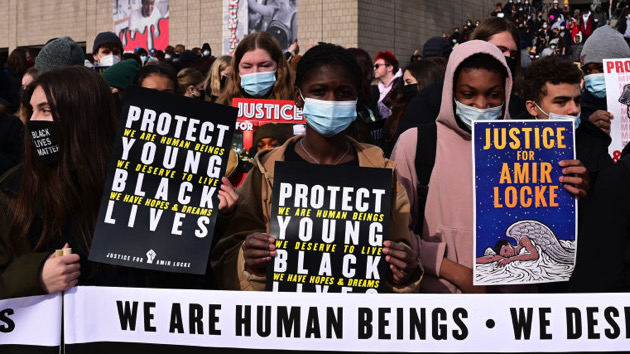 Locke was fatally shot by Minneapolis police officers in February as officers were executing a “no-knock” search warrant on the apartment he was in.

No-knock warrants allow officers to enter a private home without knocking or making their presence known.

Locke, a legal gun owner, had been sleeping under a blanket on the couch. Body camera footage shows a gun in his hand when he begins to sit up as police approach him.

An officer can be seen shooting him less than 10 seconds after entering the room.

Locke was not a suspect in the crime for which the warrant was issued and was not named in the document.

“Amir Locke’s life mattered,” read a statement from the Hennepin County Attorney. “He was a young man with plans to move to Dallas, where he would be closer to his mom and — he hoped — build a career as a hip-hop artist, following in the musical footsteps of his father.”

However, the attorney’s office stated that after a review of the case, there wasn’t enough evidence to file criminal charges.

His death reignited calls to end the use of “no-knock” warrants, which were sparked by the fatal police shooting of Breonna Taylor on March 13, 2020 after Louisville, Kentucky, officers executed a “no-knock” search warrant for Taylor’s ex-boyfriend for allegedly dealing drugs.

In his statement, Freeman also called for a reconsideration on the use of no-knock warrants: “No-knock warrants are highly risky and pose significant dangers to both law enforcement and the public, including to individuals who are not involved in any criminal activity.”

He continued: “The fact that it is standard practice for paramedics to stand by at the scene when no-knock warrants are executed speaks to the foreseeably violent nature of this law enforcement tool.”

Several states have instituted bans on such warrants. Following Locke’s death, Minneapolis Mayor Jacob Frey said his office will propose a full ban on no-knock and no-announce search warrants in the city.