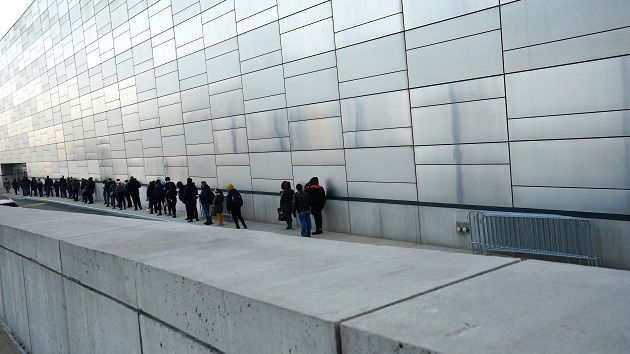 TIMOTHY A. CLARY/AFP via Getty Images

(NEW YORK) — The Javits Center in New York City is now open 24 hours a day, seven days a week, after the approval of the Johnson & Johnson vaccine a week ago.

The convention center in Manhattan is accepting appointments around the clock in a sweeping effort to inoculate New Yorkers as quickly as possible. The effort began at 9 p.m. Friday, with the Johnson & Johnson vaccine only being distributed overnight, from 9 p.m. to 6 a.m.

Doses of the new vaccine, which only requires one shot unlike the two-dose Moderna and Pfizer-BioNTech vaccines, arrived in New York during the week, according to ABC New York station WABC.

Yankee Stadium in the Bronx and the New York State Fair grounds in Syracuse are other sites giving out vaccines around the clock, also using the Johnson & Johnson vaccine overnight.

More than 3.3 million New Yorkers have received at least one vaccine dose, according to state data. Over 1.7 million people, or 8.8% of the state, is fully vaccinated.

Earlier this week, the convention center announced it had distributed 100,000 vaccinations since it first became an inoculation center in January. Nearly one year ago the Javits Center served as a COVID-19 field hospital when the coronavirus crisis first gripped the country.

About 17% of the U.S. population is partially vaccinated and 8.6% is fully vaccinated, according to the Centers for Disease Control and Prevention. California has administered the most vaccines, followed by Texas, Florida, New York, Illinois and Pennsylvania, per the CDC.

Three different vaccines — from Johnson & Johnson, Pfizer-BioNTech and Moderna — are in use in the U.S.

The Pfizer-BioNTech and Moderna vaccines are 95% and 94.1% effective in preventing symptomatic illness, respectively, but they were tested before the new, more contagious variants emerged. The Johnson & Johnson vaccine was tested against the new concerning variants and still performed well.