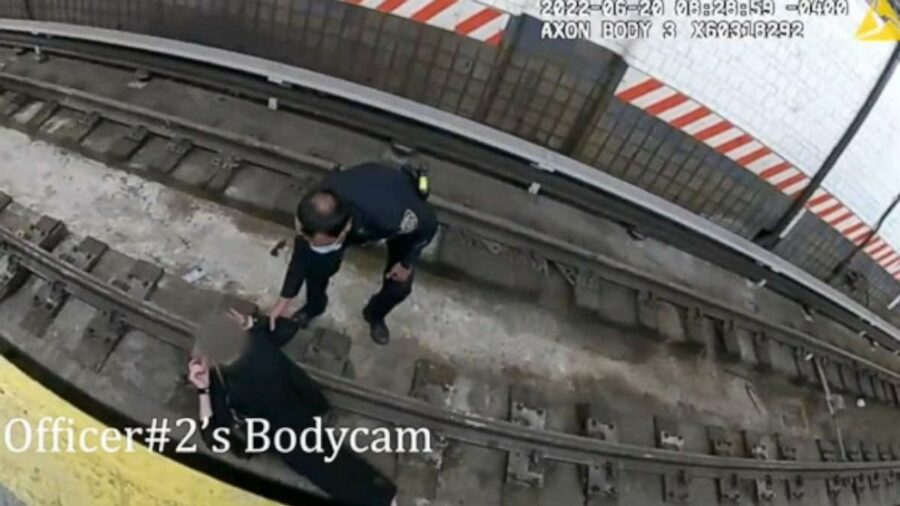 (NEW YORK) — Dramatic police body-camera video released by the New York Police Department captured two officers teaming up on a rush-hour rescue of a woman this week who collapsed on a subway platform and fell onto the tracks.

The duo sprang into action around 8:30 a.m. Monday at a subway station in the Bay Ridge neighborhood of Brooklyn, according to the NYPD.

The officers, whose names have not been released, were on their daily transit inspection when a 25-year-old woman walking ahead of them on a subway platform “suffered a medical episode and fell onto the tracks minutes before a train rolled into the station,” the NYPD said in a statement posted on Twitter.

Officials released body-camera video Tuesday night showing the woman walking on the platform and then suddenly collapsing and falling onto the tracks.

Watch as strategically deployed @nypd68pct officers who were on their daily transit inspection came to the rescue when a passenger suffered a medical episode and fell onto the tracks minutes before a train rolled into the station. pic.twitter.com/qdGwnCFWgM

The footage shows one of the officers jumping onto the tracks and lifting the apparently unconscious woman up to his partner who pulled her out of harm’s way. The officer climbed back onto the platform several minutes before a subway pulled into the station, according to the video.

The officers were not injured in the episode. The woman, whose name was not released, was taken to New York University Langone Hospital, where she was treated for a head injury.

She was in stable condition, police said.