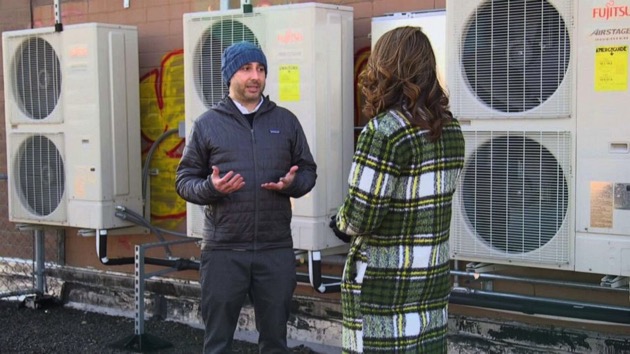 NYCHA program manager Jordan Bonomo speaks with Ginger Zee of ABC News about the heat pumps being used as part of the pilot program taking place at the Fort Independence Houses in the Bronx borough of New York. - ABC News

(NEW YORK) — As cities across the country work to meet clean energy goals in the coming years, a critical focus is being placed on public and affordable housing.

There are more than 1.2 million public housing units across the country, according to the Department of Housing and Urban Development. Many of these buildings have aging heating and cooling equipment that is largely inefficient, resulting in expensive utility bills.

Low-income households spend three times more income on energy bills than those living above the poverty line, according to the American Council for an Energy Efficient Economy. Not only are these systems expensive, they also rely on fossil fuels, making them significant sources of greenhouse gases — any gas that absorbs heat and radiates it back at the Earth, causing global warming.

In America’s largest city, New York, more than 80% of low-income housing relies on old boilers fueled by natural gas, propane or oil. The New York City Housing Authority oversees more than 170,000 units and is the largest landlord in the city. The agency is looking to the future, and is required by law to reduce its greenhouse gas emissions 40% by 2030 and 80% by 2050. To tackle that goal, NYCHA is beginning to address a long-standing problem with energy in its buildings.

The boiler at the Fort Independence Houses in the Bronx, home to more than 700 residents, broke at the end of 2021. The building was built in 1971 and people have had a difficult time staying warm this winter.

“I have my socks on. I have a T-shirt. I have sweatpants,” said resident Lauren White. “I have another sweatshirt and I have a hood, and sometimes I put the scarf around my neck so that I could be warm.”

NYCHA brought in a temporary mobile boiler to provide heat for residents in the complex while the building’s boiler, which is 18 years old, is being repaired. NYCHA told ABC News that repairing the equipment and finding the parts takes time.

Unfortunately, this energy problem is not unique. Heating outages have been reported in low-income housing from Brooklyn to Queens this winter. Tragically, 17 people, including eight children, died last month in a fire started by a space heater in a privately owned building in the Bronx.

NYCHA, the city’s public housing agency, is currently testing a pilot program at the Fort Independence Houses using electric heat pumps inside seven units. Jordan Bonomo, the program manager overseeing the electrification of NYCHA’s properties, said that heat pumps are like air conditioners that can work in both directions.

“In the winter, [the heat pump] goes into heating mode and takes heat from outside even though it’s cold,” said Bonomo. “I know it feels cold, but there’s actually heat here and it transfers inside.”

NYCHA said the heat pumps are six times as efficient as the old boiler system.

Heat pumps can also reduce greenhouse gas emissions by up to 54% compared to natural gas alternatives, according to a study from the Natural Resources Defense Council and the University of California. This is because heat pumps don’t need to use fossil fuels to generate heat, they just transport heat.

If the new heat pump technology is successful, it will deploy the new technology to more than 50,000 apartments over the next 10 years, according to NYCHA. But even that effort will only impact 30% of NYCHA properties.

John Rogers, an energy expert from the Union of Concerned Scientists, told ABC News that heat pumps were not previously an option in very cold climates, but that technology is now changing.

“I think what we need is to be looking to the building owners and building managers and the government — the city, the state and federal level — to be driving us in the direction of truly clean energy, of which energy efficiency is a huge piece,” said Rogers.