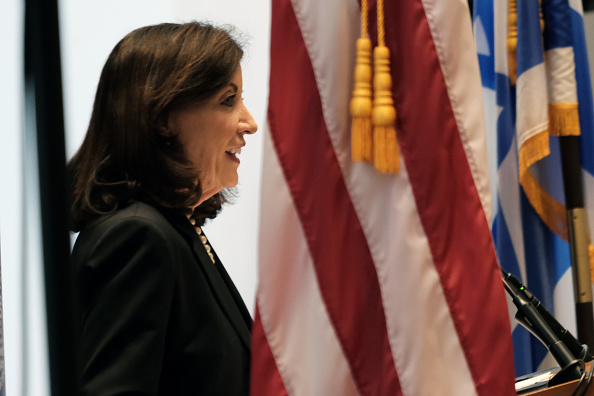 Animal activists have been calling for such a ban for years contending that pet stores are often stocked with animals that are bred and abused in “puppy mills” and other mass breeding centers.

Under the law, which goes into effect in 2024, retail stores that previously sold pets can still operate and sell pet supplies and other accessories. They also have the option to charge shelters and rescue groups rent to use their space for adoptions.

Store owners face a $1,000 fine for violating the new rules.

State Sen. Michael Gianaris, who co-sponsored the bill, said that puppy breeding mills have been known to keep animals in unsanitary conditions, where they’re abused and neglected.

“Today is a great day for our four-legged friends,” he said in a statement.

The American Society for the Prevention of Cruelty to Animals has pushed the governor and other state leaders to do more against the puppy mill pipeline and go after stores that sell animals from those facilities. A report released this year by the ASPCA found that 1 out of 4 of puppies shipped to New York state pet stores came from dog brokers who buy puppies from licensed and unregulated breeders and resell the animals to stores.

California was the first state to ban the sale of pets in 2019 and four other states, Washington, Maine, Maryland and Illinois, have followed suit.

“We are hopeful that this enormous step by New York State may encourage other states to take similar action to stop the cruel commercial breeding industry from supplying pet stores within their borders,” Matt Bershadker, the president and CEO of the ASPCA, said in a statement.

Some pet shop owners, however, criticized the governor and state legislature for the bill, saying the move hurts their businesses without going after the root problem.

“We have policies like this where everybody just makes the assumption that every single breeder that a pet store works with looks like the ones you see on TV that are filthy and the [dogs] are dying, and that just simply isn’t the case,” Emilio Ortiz, the manager of the New York pet store CitiPups, told NY1.

Gianaris, however, argues that there isn’t a single New York pet store that hasn’t been touched by the puppy mill industry.

“That’s why we should ban it outright. There is no such thing as a responsible retail sale of animals in New York,” he told WABC, ABC News’ New York station.