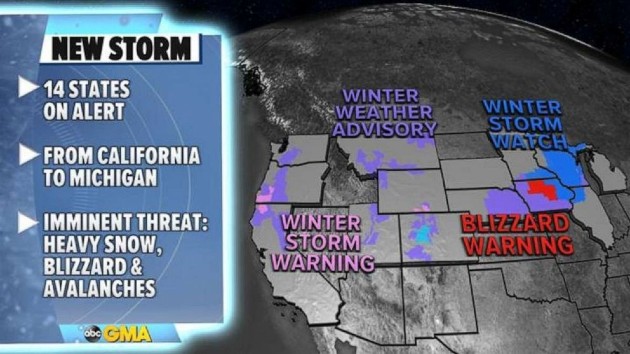 (NEW YORK) — The long lasting, record breaking and historic nor’easter is finally starting to move out with just some blustery conditions and snow showers for New England Wednesday.

The highest snowfall total in the Northeast from this storm was 3 feet in Nazareth, Pennsylvania.

In Allentown, Pennsylvania, it was the second biggest snowstorm in recorded history with a whopping 27.3 inches of snow.

New York City still stands at 17.2 inches, Philadelphia got 7.9 inches and Boston had the least snow with only 1.2 inches because of the ocean influence.

Attention now turns to the next few storms moving across the country with heavy snow, gusty winds and blizzard-like conditions.

There are 14 states on alert for winter weather from California to Michigan on Wednesday morning.

This new storm will bring heavy snow from California to Colorado with avalanche danger for the region before tracking east into the Midwest where a blizzard warning has been issued for Iowa with a winter storm watch in effect for Minnesota, Wisconsin and Michigan.

Gusty winds, rain, icy mix and snow is forecast in Chicago on Thursday.

The heaviest snow will be in Iowa, southern Minnesota, Wisconsin and Michigan where some areas could see more than a half a foot of snow.

By Friday, the new storm will move into the Northeast but, because temperatures will be milder for the I-95 corridor, there will be rain rather than snow.

Meanwhile, yet another storm will be moving through the Rockies right behind this one with more snow.

At this moment, this second storm looks like it might not come together for the Northeast by Super Bowl Sunday.

Both main models, European and American, are showing not much happening on the East Coast late this weekend but this still has time to change.

What is certain is that some of the coldest air in years will move into the Midwest and then eventually the Northeast.

By Sunday, wind chills in the Upper Midwest and the Great Lakes will be in the 30s, 40s and even 50s below zero.