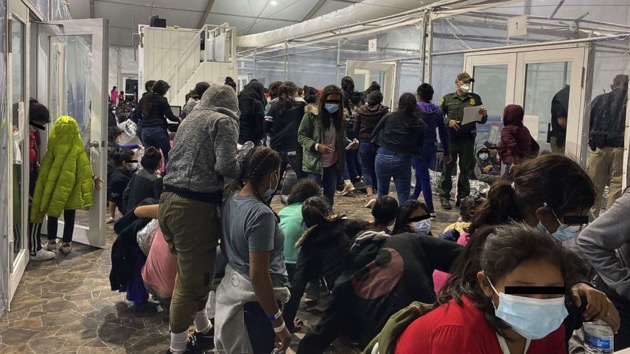 (WASHINGTON) — New photos released Monday by a Texas House Democrat show crowded conditions inside a U.S. Customs and Border Protection overflow facility in Donna, Texas, where migrants, including families with children, are being held for processing before their transfer to facilities operated by the Department of Health and Human Services.

Taken over the weekend, the photos show migrants, with their faces obscured by Rep. Henry Cuellar’s office, sitting in crowded, makeshift quarters assembled by the U.S. Border Patrol to handle the increasing number migrants crossing the southwest border that are straining the Biden administration’s existing facilities and resources.

The Texas Democrat has been one of the most outspoken members of President Joe Biden’s party to criticize the administration’s handling of the situation at the border. He has repeatedly warned that the change in policies from former President Donald Trump’s administration is one of the reasons why migrants, particularly unaccompanied children, are crossing the border with Mexico in greater numbers.

The photos were first published by Axios.

Immigration attorneys who recently met with migrant children held in the Donna facility previously told ABC News the facility was severely overcrowded, and that the children told them some were forced to sleep on the floor, with limited time outdoors in a courtyard.

“CBP, working with its other agency partners, is working to safely and orderly transport migrants to other sites set up by the Department of Homeland Security,” a CBP official told ABC News about the Donna facility.

There are now 3,889 migrants in the facility that is meant to hold just 250, meaning it is currently at 1,556 percent capacity, according to internal CBP documents obtained by ABC News.

A record number of 5,000 unaccompanied children are in border patrol custody, and an additional 10,500 are in the care of U.S. Health and Human Services, according to an HHS official and document obtained by ABC News.

The document also shows that, on average, HHS is taking in far more migrant children than it can match with sponsors and family members. The 7-day average of daily referrals, most of which come from Border Patrol, was 468 per day while the number of those discharged was 224 per day.

New agency data obtained by ABC News shows a nearly five-fold increase in the number of children and teenagers held in border patrol custody for over 240 hours since March 15 – from 185, to 823 as of Sunday – despite the legal 72-hour limit.

The Biden administration has prohibited journalists from visiting facilities being used to house migrants, citing the COVID-19 pandemic.

“We have seen large numbers of migration in the past. We know how to address it. We have a plan. We are executing on our plan and we will succeed,” Homeland Security Secretary Alejandro Mayorkas said on ABC’s This Week on Sunday. “We are rebuilding the system as we address the needs of vulnerable children who arrived at our borders.”